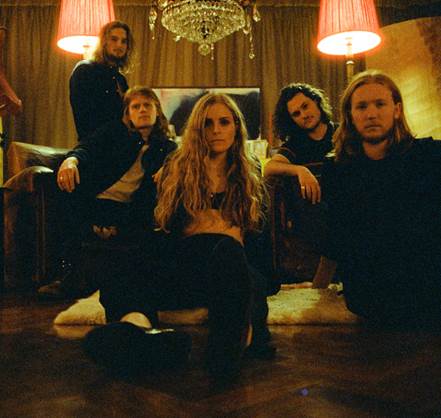 Today, new Communion Records signing and Brighton five-piece MarthaGunn release their second single ‘Love and Emotion’. Listen HERE. The song paves the way for their arrival on the festival circuit this summer, with slots at Bushstock and Citadel already announced.

Lead singer Abi Woodman says of the track, “Underneath an angry and bitter exterior, love and emotion represents sadness from an unfulfilled relationship. When first meeting someone it can be easy to project your ideals onto them and waiting for someone to reciprocate that is crippling. This song is a realisation that who you want someone to be may be different from who they are.”

‘Love and Emotion‘ is an ambitious and free-thinking track based on not having the love that you desire. The song pairs lead singer Abi’s arching vocal with beautifully crafted melody and knotted guitar lines.
The track comes off the back of their debut UK headline tour and impossible-to-get-into show at The Great Escape; a culmination of the live performance composition they have been honing over the last 18 months. The band will play a show at Omeara on 13th June.

Made up of Abi, Max, Humphrey, Ally and Frankie – MarthaGunn first bonded together in Brighton and quickly found themselves living together. Taking musical cues from bands including Fleetwood Mac, Mystery Jets and Haim, over the last 18 months the band have been honing their live show and are now positioned for an exciting 2019.