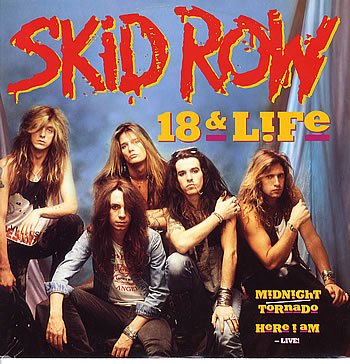 Heavy Metal or Hair Metal? we know for sure that the band members had very long hair but the music they did…..for sure was heavy!

The band was formed in 1986 by the former guitarist of Bon Jovi (also one of its best friend) Dave “The Snake” Sabo, the base guitarist Rachel Bolan, the drummer Robb Affuso, Scotti Hill (second guitar) and at the vocals Sebastian Bach.

Sebastian is a real frontman but he went trough several problem with the band and with the audience .

Famous is the tshirt that he wore during a concert : “AIDS kills fags dead” – later he will apologise saying that a fan trow it to him and he wore without reading what was written on top of it.

The last album of Skid Row is dated 2006 but we can say that they weren’t the same thing after the departure of Bach.

18 and life is part of their first album released back in 1989 titled Skid Row.

The song has been written by Sabo after he read about an incident between two young guys; one of them killed by mistake with a gun his friend and , for this reason , he will be arrested and imprisoned for his lifetime.