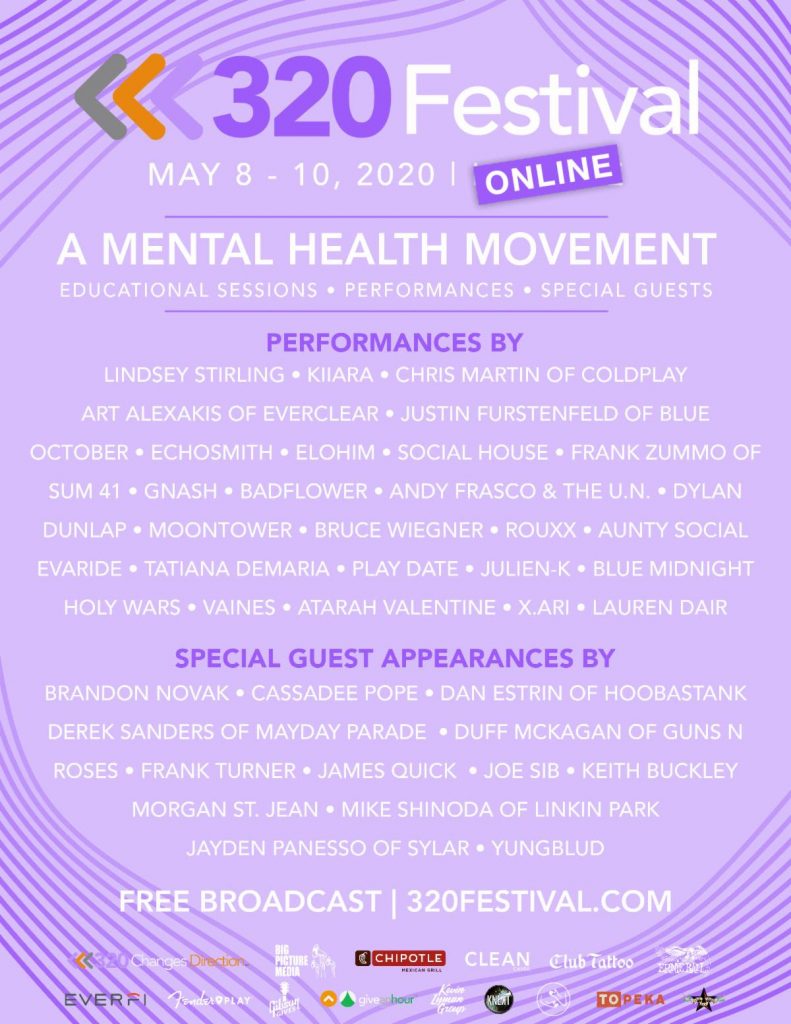 In partnership with KNEKT.TV, people from all around the world can tune in on Facebook Live, YouTube Live, and the KNEKT.TV Network on Roku and Apple TV. The virtual event is free and open for all to join and participate. RSVPs for the 320 Festival are now open at https://bit.ly/320FestRSVP.
“The idea for 320 was born out of my personal experience and the recognition that we can do better to address the needs of those who are suffering with mental health concerns and addiction,” shares Talinda Bennington.
Bennington created 320 Changes Direction in honor of her late husband, Chester Bennington of Linkin Park. She continues, “We need to change the culture of mental health so that those in need – and their family members – are able to speak openly about their struggles so that they can seek the care they deserve.”
Kevin Lyman continues, “In times of adversity, it has always been about adapting and we are glad we were able to work with KNEKT.TV to bring the 320 Festival online.”
The 320 Festival ONLINE will feature over 40 non-profit partners providing resources, Mindfulness Daybreaks, and live performances from artists including Lindsey Stirling, Kiiara, Chris Martin of Coldplay, Art Alexakis of Everclear, Justin Furstenfeld of Blue October, Echosmith, Elohim, Social House, Frank Zummo of Sum 41, Gnash, Badflower, Andy Frasco & the U.N., Dylan Dunlap, Julien-K, Moontower, Bruce Wiegner, Rouxx, Tatiana DeMaria, Aunty Social, Evaride, Blue Midnight, Holy Wars, Vaines, Atarah Valentine, X.ARI and Lauren Dair. Additional special appearances by Brandon Novak, Cassadee Pope, Dan Estrin of Hoobastank, Derek Sanders of Mayday Parade, Duff McKagan of Guns N Roses, Frank Turner, James Quick, Joe Sib, Keith Buckley, Morgan St. Jean, Mike Shinoda of Linkin Park, Jayden Panesso of Sylar, Yungblud and more will round out this year’s line-up.
Participating artist Kiiara shares “Shedding light on mental health awareness is necessary in order to lessen the stigma surrounding it. 320 does such an incredible job in doing so!”
“Pushing through and taking this Festival online is truly beautiful & needed during these difficult times,” continues Frank Zummo of Sum 41.
Musical duo Social House continues, “We believe that mental health is one of the most important conversations everyone should be having today – breaking down stigma and opening up acceptance to so many struggling. We are so excited to be joining 320 Festival Online and all the other artists participating to continue spreading the word about such an important cause that is both deeply personal & significant to us.”
The Educational Sessions will feature discussions surrounding topics like Cultural Perspectives on Mental Health, Social Media: The Age of Anxiety, Coping and Thriving After Trauma, The Psyche of Sports: Lessons Learned On and Off the Court, Prevention Resources: Learn the 5 Signs and How to Help, Criminalizing Mental Illness: America’s Shame, Hope for the Day’s Things We Don’t Say Workshop, Music’s Effects on Mental Health and Addiction, Being an Activist and a Creative: How to Channel Both of Your Passions to Impact Your Community, Mental Health + The Education System, Living with Addiction, Mental Health In The Workplace and more. 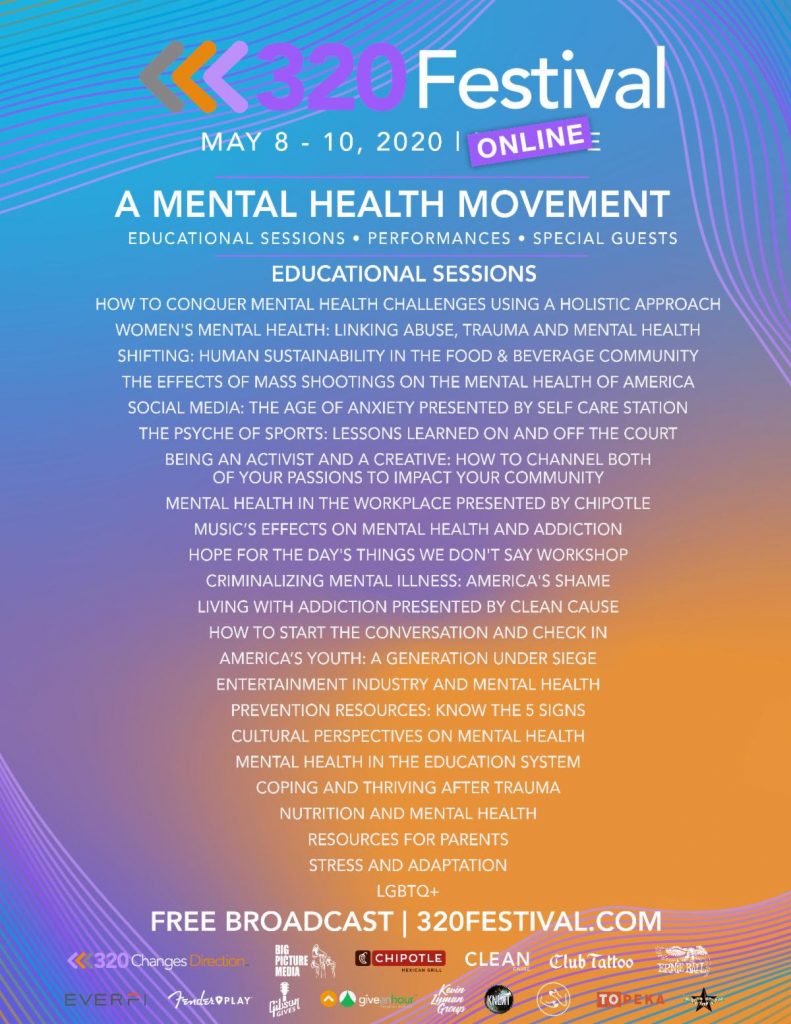