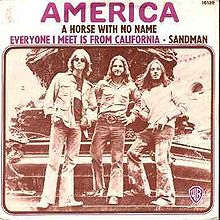 A horse with no name – America

In 1972 the folk rock band America released its most famous album and one of their major success : “A horse with no name”

The lyrics would seem simple at a first glance, while their meaning, according to several sources, is totally different….

In fact, “horse”, would have been  the slang name for heroin….

The desert that becomes sea is just another way to describe the emptiness that the drug leaves after it finishes its effect.

No matter what the lyrics are about, the song had such a big success that was subject of several covers and it appeared in several movies/tv shows.