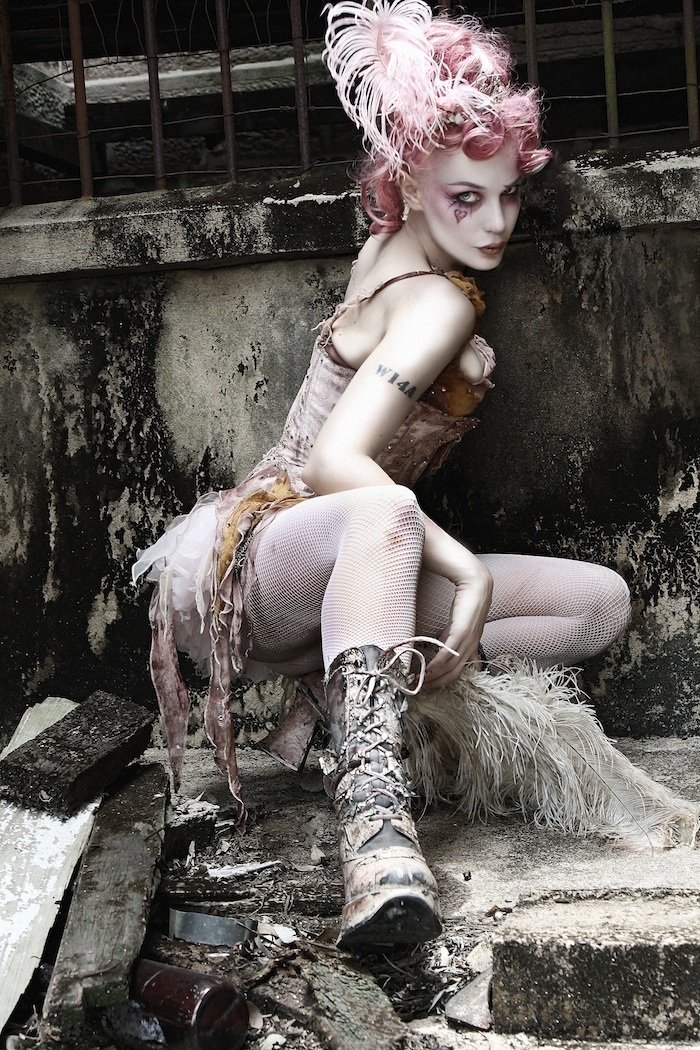 Warped tour is staring in less than 60 days and we are sure, one of the greatest shows will be the one of Emilie Autumn (http://www.emilieautumn.com) that answered, in a very personal interview, our questions regarding her writing and lyrics…

RYL: Let’s start from the 2014 Warped Tour, how do you feel about it? How are you preparing yourself for this important moment?

EMILIE AUTUMN: Thank you for the opportunity to chat – it’s a pleasure. In preparing for the Warped Tour this summer, I am finding myself going deeper into my own story, something I thought I knew every dark corner of, being that I wrote it, and learning that there is so much hidden in my own words that I hadn’t even realized.

I am now going The “Asylum Experience” that we are presenting on the tour is all about bringing the world of my book, “The Asylum For Wayward Victorian Girls”, to life in an even more literal and physical sense than I have ever been able to do before.

It is a monumentally insane amount of work, which is just as anything that is hopefully important and meaningful should be. Today, I am working on casting and the pros and cons of building a carpentry studio in my backyard.

RYL: Lyrically speaking, how would you define your last album “Fight Like a Girl”?

EMILIE AUTUMN: As you know, the album is extremely dramatic, and I suppose that would be my go-to word in describing it…the drama almost supersedes any genre I might liken it to.

My challenge was to create a real narrative, as it is all one continuous story, like a musical, but one that would be enjoyable and able to be understood by the listener only hearing one song, out of context.

I think the best musical scores can be enjoyed in this way, with many producing hits that stand on their own, for example, “Memory” from “Cats, “On My Own” from “Les Miserables”, and even “My Favorite Things” from, obviously, “The Sound Of Music”.

I’d like to think I succeeded in this to some small degree with songs like “Take The Pill”, “Fight Like A Girl”, and, most especially, “One Foot In Front Of The Other”, which I think applies to just about everybody, whether you know the Asylum story or not.

RYL: Which evolution has taken your way of writing the verses of your songs in the last 3 years?

EMILIE AUTUMN: My lyrics have taken a definite turn from writing very personally about myself in particular to a more narrative, storytelling style, and this is entirely because of my decision to go in that direction musically and theatrically.

I know that my future lies in composing musicals rather than rock shows, so producing an album that was in a more theatrical style than what I’ve done before pushes everything towards that goal, even while performing that material in a rock setting.

The fact is that all of the lyrics are still very personal, and are very much about myself, but I am shielded a bit by the cover of “the story”, and, in a sense, that has given me freedom.

RYL: Let’s talk about a song that we like particularly and we believe it is talking about you… isn’t? “Take a Pill”, what does it means for you?

EMILIE AUTUMN: I’m so glad you like the song – thanks very much! “Take The Pill” serves a highly significant purpose in both the album and the live show. In the album, the modern electronica/industrial stylings are intentional, as I am telling the listener that we are in the modern world, not the Victorian one at that moment (the story behind the album is taken from my novel, “The Asylum For Wayward Victorian Girls”, which is about myself and my Victorian alter ego existing in similar circumstances simultaneously, those being a psych ward and an insane asylum — same thing — respectively).

An example of a song set in the Victorian alternate reality would be “Gaslight”, which you can identify by not only the character’s words, but also the harpsichord and classical influences. In the show, “Take The Pill” is also useful in that it not only gives me the chance to bounce back and forth between characters, but it keeps some semblance of a modern day rock show in what might otherwise seem a purely musical theatre experience, and I want to save that for when we actually take over Broadway.

“Take The Pill” allows me to honor the rock format, which I do love. The song itself tells the part of the story where I am in the modern day psych ward being herded around with the other inmates (“patients”) and being forced to take medication and do everything the doctors demand, whether or not we want to, and whether or not these things are in fact the “treatment” we really need.

It is simultaneously about my own relationship with, and often antagonistic feelings towards, the medication that I currently do take for my own survival. I hate the drugs, but I have not been able to live without them, and this is a constant mental torment. This is most definitely evident in the song.

EMILIE AUTUMN: I find that I most often write music and lyrics simultaneously, as one always directs the other. I also find that I approach many songs as puzzles, or math problems, to be solved, with my job being to find the one right answer – because I do believe that, in the case of most songs, there is only one way that they can go in order to be a “perfect” song.

I’ve noticed myself writing backwards a great deal, establishing the final line or ending section, then going back to the beginning and experimenting with structure until I find the best way to get to that final line. It’s like writing the punch line of a joke first.

RYL: How difficult is to translate your thoughts in writing?

EMILIE AUTUMN: Not difficult at all…I love language, and I tend to think in literary terms, seeing words in my head as I say them, as I do with notes as well.

RYL: If you had to select the best verse ever written in a song, what would you chose?

EMILIE AUTUMN: “When you sleep, I will creep, into your thoughts, like a bad debt, that you can’t pay, take the easy way and give in, oh, and let me in”…also the line “I’ve made up your mind”, both from “The More You Ignore Me, The Closer I Get, by, of course, Morrissey. The question is impossible to answer definitively, so that’s just a random verse I absolutely love, amongst the countless.

RYL: And the best verse you ever wrote? Or, at least, the one that has the most important meaning for you…

EMILIE AUTUMN: “If I’ve no one to fight, how will I know who I am?” from “One Foot In Front Of The Other”. This is a question I’ve long secretly asked myself, and I’m pleased that I had the guts, to put it crassly, to say it out loud, realizing that I’m most likely far from unique in wondering this.

I suspect we all define ourselves to a certain degree by our battles, and have wondered who we would be and what we would stand for if we could simply live a life of pure peace and happiness.

RYL: Let’s go back to the tour, which is the best gig you have played so far?

EMILIE AUTUMN: There are so many different things to be grateful for about so many different locations and audiences that this is a virtually impossible question to answer. I can say, however, that there is something particularly special about performing in London as it is really the birthplace of the Asylum, with most of my story being set in Victorian London. Playing New York City is always thrilling, especially knowing how very close I am to Broadway.

But then, having recently performed in Russia, I came to have a whole new perspective on what makes a show a truly great show.

We couldn’t bring any of our stage sets, and so might have felt like we were bringing less to the audience, but what we saw in the faces and energy of the audience there was so very much the opposite…they wanted to see our souls, not the spectacle, and we were honored to give them this.

The girls and I learned even more gratitude than we already feel all the time, we learned where our true power and magic really lies, and we learned about priorities. Not just priorities in what makes a truly good show, but about the reasons to go to a country where people are waiting for you, even when most advice you receive tells you not to get on the plane (because of the antagonistic atmosphere towards performers representing freedom of thought and sexuality).

If judging by how much I’ve learned, performing in Russia could have been my greatest experience.

RYL: Last question, tell us everything about “Gaslight” …

EMILIE AUTUMN: This could be the best question I’ve ever been asked! “Gaslight” is my favorite song, and also my favorite to perform. It’s the song I look forward to each and every show, and the one during which I feel the most present and honest.

The song is a very literal representation of a scene from my book, wherein us inmates in the Victorian insane asylum have lost virtually all hope. It is the dark before the dawn, as they say. We have realized that, despite our fighting, we have no chance of escape, and are very much waiting to die.

Our only consolation is eachother, though more of us are missing every day, being taken from our cells each night by the villainous Doctor Stockill and experimented on until death. We reach through the bars in the dark, grasping the hands of our friends who we could be seeing for the last time, as the Doctor stalks the halls of the Asylum in his plague mask holding the gas-lit lantern.

The crux of the song is that the emergence of the gaslight represents both life and death, because for every girl who is taken and killed, those of us remaining live another day.

Underlying this hopelessness is the sense of dread, always knowing that the next inmate taken could be me, or, worse, one of my friends. And if that isn’t a jolly note to end an interview on, I don’t know what is!