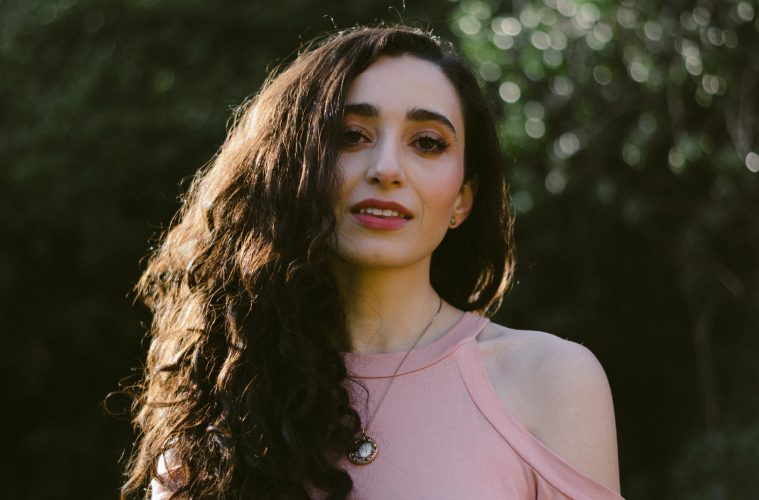 I usually have different phrases and words pop into my head at weird times and I keep a log of these in my phone’s notes. When I’m writing a song, I’ll often look through these and free write in my journal (yes, I’m still analog). Looking at these words on paper really helps me start to wrap my head around a concept.

I think expressing yourself in a way that is honest and relatable is so important. I like to really push the envelope and try to come up with ideas that are fresh, which of course is an ongoing battle. But I think honesty and vulnerability is the most important.

Absolutely! I always worry that I’m sharing too much of myself through my lyrics. It’s easier to admit things in lyrics and I often worry about revealing these details once the song is released. But I think that is what draws people to music. I want listeners to be able to connect with me on a personal level.

The lyrics to my song “For Whom They Sing” (off the eponymous album) are some of my best. I took inspiration from the Apache Native American tradition of having a medicine man pray over a sick person (“the one for whom they sing”). I deal with some chronic health issues so I used this imagery to express how I was feeling. I think it’s my rawest and most meaningful song.

What inspired “Leave You Lonely”, part of your EP “A Little Intimate”?

I wrote this song with writer/producer Anna Schulze last summer. We both come from a synch licensing background so we originally intended the song to have a lot of cinematic imagery for television. It quickly became clear that this would be a song for my artist project since it was so emotional for me. We used these lyrics that I had jotted down on my phone a month earlier—“it’s a little intimate, I’m a little into it”—as a jumping off point. It took us a full day and about three snack breaks, but we ended up with this beautiful song. I think it’s the best song I’ve written to date.

Do you remember the day you wrote “It Felt Good”?

“It Felt Good” was written over the course of about 6 months. I originally sang the melody for the verse and chorus into a voice note, and the only lyric I was sure about was the “it felt good” hook. I sent this to co-writer/producer Jason Boule and he built the track and we worked on it in person about a month later. It took a few re-writes with both Jason and co-writer P.J. Pacifico, but we finally finished up the song about 5 months after that. So this song took time to write, but I think it was worth it.

These songs were some of the first products of co-writing. I wrote my last EP and album almost entirely on my own. A few years ago, I started working with my mentor and friend P.J. Pacifico and he really taught me a lot about co-writing. So this album was born through collaboration with P.J., as well as Jason Boule (who wrote/produced 4/5 of the songs on the EP).

I worked with producer Jason Boule on 4 of the songs and Anna Schulze on the 5th. They both have different styles and influences and I learned a lot from both of them. I think the best advice Jason gave me was to incorporate some song math into my writing. It brought my songwriting to the next level.

I just signed a licensing deal with Sweets & Pop and am continuing to write songs for myself and other artists. I’m hoping to continue releasing new music on a more regular basis. And I’m planning on getting back into performing in Los Angeles.