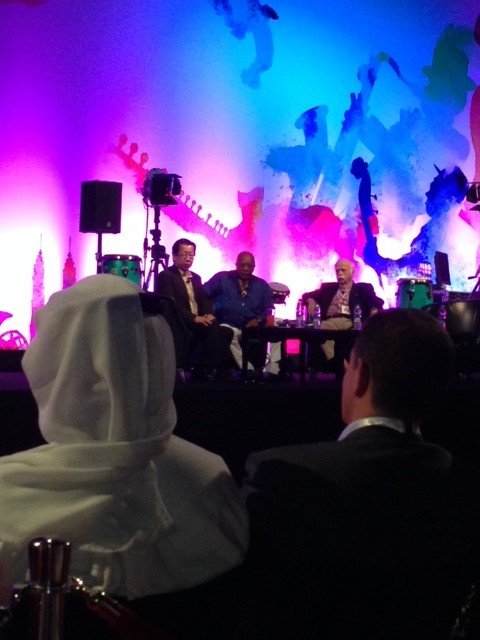 “An intimate night with Quincy Jones”, this is how we would like to define what happened tonight in Dubai during the first seminar held by the world famous producer during the Dubai Music Week.

Believe us when we tell you that it was a “once on a lifetime experience” that we will never forget; in fact, we could meet in the same room:

And, if this was not enough for you to have a special night, Quincy Jones (does he needs to be introduced?) was there too.

As we said, the occasion was the Dubai Music Week, more precisely a seminar on the Michael Jackson Dream Team (this is the name given to Bruce, Rod,Siedah and Quincy) that contributed to the success of major albums of the pop star like BAD or THRILLER.

During these two hours  (that literally, flew away) we were exposed to many stories about part of the life of  Michael, the origin of the lyrics of his songs (did you knew that, for instance, Thriller initially was called Starlight?) and the music.

We want to tell you one of them, that we consider very funny; Michael Jackson, at the beginning, wanted to have songs with long intro (like Billie Jean), why? Because he wanted to use this “space” to dance!

Among the amazing things that happened this night,we had the privilege to see live Siedah, she sang I Can’t stop Loving You and Man in the Mirror…… WOW! Amazing voice…..(we loved the story about the creation of the song Man in The Mirror…..you will have to wait few days and we will publish all about it 🙂 )

Ben Fong Torres (https://rockyourlyrics.com/not-fade-away-ben-fong-torres/) brought his experience as journalist on stage, his knowledge of music allowed him to conduct the all interviews in a superb way.

You know, it is very difficult to transmit in words what we saw tonight……as Siedah said…….”you can’t believe how unique is this moment, you will see rarely these personalities in the same room”…..well, we do believe her……. we really were.