I lay down some piano, get either frustrated or elated by some aspect of life, then write it out in a notebook until it’s rich with wordplay and internal rhymes or a hooky melody. Sometimes, it’s both. 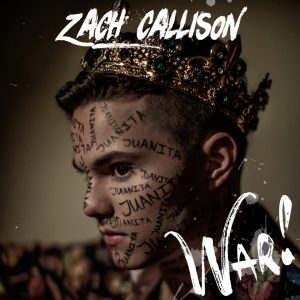 The most important thing for me to focus on is telling a story in an interesting way rather than bending over backwards trying to find a story that’s never been written before. Every tale has been told before in its most basic form many times over, so in order to stand out and captivate listeners you have to find a new method of telling it.

I’m not scared of getting personal with my lyrics (that’s all I can write most of the time), but I do hesitate to tell the full truth often, purely because of the nature of the events I want to write about. There’s this clean-cut, TV-ready image of Zach Callison that’s been cultivated for me over the last decade of working in Hollywood…I’m so, so far from that in real life that I’m afraid of letting it all out at once because it might be too much of a shock for people.

The entertainment industry is not a place for growing up. It twists young people. In many (recent) cases, it kills people…but that’s where I grew up, that’s my story. I’d be a fake if I didn’t write that into my music, so I’ve had to strike a balance with this first album.

Of the stuff that’s released so far, I’ll go with the chorus for Curtain Call:

I felt the need to put a spotlight on the plight of young performers, including myself. We leave all of our issues in the wings of the stage; we get under the lights, do what we love, then return to all the demons we left behind the curtains. And people just eat it up.

The role Curtain Call plays in the overall narrative of A Picture Perfect Hollywood Heartbreak is hard to describe without spoiling unreleased songs, but the intent of the song was to capture the moment where a damaged mind decides to start “playing a part” in their day-to-day life in order to deny that anything is wrong.

It’s also a commentary on a lot of young actors and artists who have lost the battle; there’s been a lot of dead 20 and 21 year olds in the industry this year, some of whom I knew or admired. I don’t know how we fix the problem, but I needed to say something. In the words of Juice WRLD: “nothing like the feeling of uncertainty, the eeriness, the silence…”

Also, beatboxing for LL Cool J while he freestyled was a high point.

Release the album in the summer, drop some video content (!), go on tour in the second half of the year with NateWantsToBattle (tour dates just announced!) and make some new music post-album. There’s definitely a war plan for the next six months.