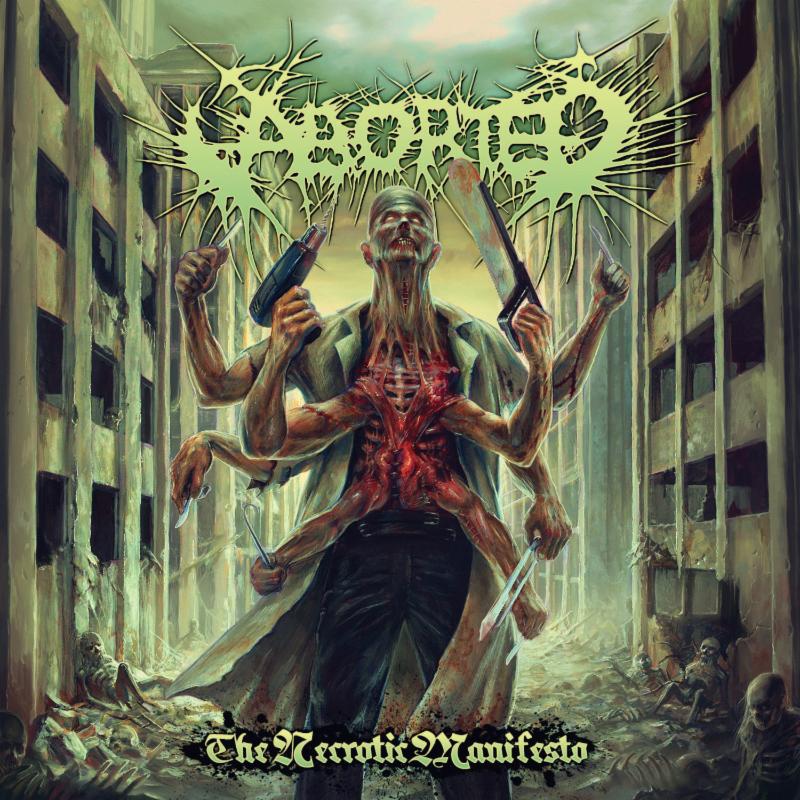 We hope you are ready for one of the best  metal album of 2014…… The Necrotic Manifesto of Aborted (http://www.goremageddon.be).

Today their singer and author of all their lyrics, Sven De Caluwe,  answered to our questions regarding its release and the meaning of their songs….

RYL: Your new album “The Necrotic Manifesto”is set to be released in two weeks time, according to what you said in previous interviews it is your version of the ancient book “The Necronomicon”, why you decided to focus on it?

ABORTED: Well we wanted to not have a concept album but still tie everything together within a certain concept feel, which is why a bundle of stories, or book, would be fitting hence our own book of the dead, aka necrotic manifesto aka necronomicon.

We had to tie it all in with our card game and it was just the right approach, as well as a lot of fun.

RYL: How was to write its lyrics? Which was the main challenge you encountered?

ABORTED: The main challenge I had this time around was deadline, we literally finished the songs the day I would start writing the lyrics, and the next day had to record the songs.

So I would write about 4 lyrics per evening, while then recording those same 4 the next day, and then write 4 more in the evening of that day. So it was very intense, but I had my ideas up front, Im just not the kind of person that writes lyrics before he has vocal patterns worked out, and I wait for ht music to be finished to do that.

RYL: Lyrically speaking, how it does differs from your previous albums?

ABORTED: It doesn’t really, its your typical aborted album dealing with old school horror, slasher, gore guts and some social criticism thrown in, there is definitely a message but we are not a preaching band and it is up to the fans to pick it up from between the lines themselves 🙂

RYL: Which verse/lyric is your favorite among the songs of the album? Why?

ABORTED: I actually tried to have more of a chorus feel on this record and try to have things memorable, there are several favourite moments of mine , either they are just cool patterns or its just hilarious lyrics that i cant believe we actually put on the record. such as : oh holy scat, once from the pooper, now shall be heard. this pungent mess. the whole wheat shaman of death’from excremental veracity, or the catchy chorus of the title track of the album.

RYL: Have you ever faced disagreement on the lyrics of a song? If yes which one?

ABORTED: Not really since I write all of them and the band just trusts me to do what I do hahaha.

RYL: Why, in your opinion, the fans favorite song (at least for ITunes) is The Origin Of Disease? What does this song means for you?

ABORTED: Its probably the favourite one because we have an actual video for it and it was a single so people go to know that album by that song, another reason might be that its very brutal and has one of the heavier breakdowns of that album. man is the origin of disease says it all honestly, its also a shout out to your russian fans since the song is partially in russian.

RYL: You recently released the lyric video of Coffin Upon Coffin, what is “a thin layer of compost between right and wrong”?

RYL: Let’s talk about the tour, which is the show most awaited by you?

ABORTED: Ummm, well the tour was killer, I think Edmonton, Anaheim, San Francisco, Toronto, Montreal and Calgary were the highlights of the US tour, as for the mexican tour def Guadalajara and Mexico city were the highlights, for europe it was for sure neurotic death fest, brussels and darmstadt who rocked our ass off!