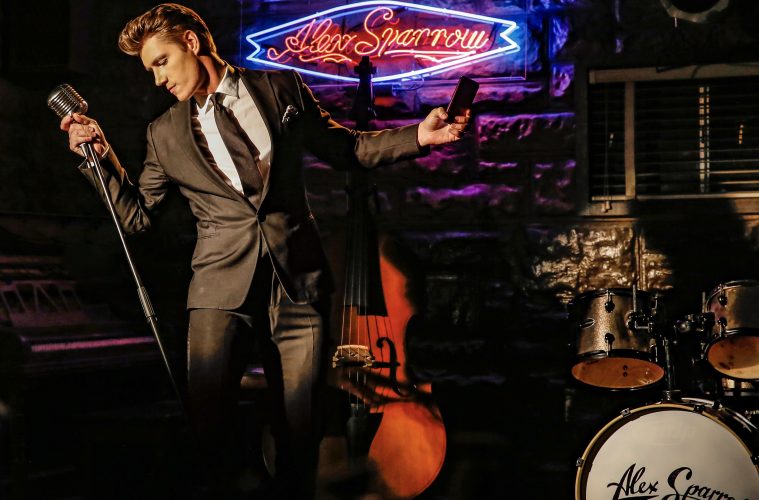 The global rising star that is Alex Sparrow is on a seemingly unstoppable trajectory of success and earth staggering talent.

It’s a rare find in the entertainment business to see one individual not only engage in but conquer, a plethora of fields – actor, director, screenwriter, recording artist, musician, composer, producer, arranger. Alex’s credits are nothing short of mind-blowing.

Born in Russia and raised in the family of Austrian Baron Alexis von Gecmen-Waldek, Sparrow’s early training included Moscow Jazz College, followed by Moscow Art Theatre Studio School (MHAT). His dedication to his all-around craft saw him add ‘professional stuntman’ to his name through his study at Mosfilm Studios. Already a multi-instrumentalist and skilled in dancing in a myriad of styles, Alex was committed to further development and excellence in the film world. In his new home of L.A, he completed both Anthony Meindl’s Actor Workshop and studied at the Ivana Chubbuck Studio.

Truckloads of natural ability fostered with endless hard work certainly paid off. Amongst some of his most impressive mainstream achievements, Sparrow’s respective wins of “X-factor’, ‘Dancing with the Stars’, and twice Nickelodeon Kids Choice Awards as ‘Favourite Actor’ surely put him in a stand out category of his own. And if that wasn’t enough, his music video “She’s Crazy But She’s Mine” (written, performed, directed and starring Alex himself) quickly going viral across the globe, now boasts more then 980 million views on Facebook, and 237 million plus on YouTube.

Perhaps it’s this gifted Eastern European’s accomplishments in film that have earned him the most critical acclaim. A three-time ‘Best Score Award’ winner and several acting gongs, Alex composed the music for the European co-produced film “The House of Others”, a multiple award-winning post-war drama that was a Georgian Oscars and Golden Globe entry in 2017, also receiving the most prestigious US Spotlight Award and Satellite Award. Having over 30 Russian and European films under his belt, Alex also stars in the new third and fourth season of popular American series UNREAL on Lifetime Channel.

Just beginning to take his first steps on the way to his International career he got into an accident, leaving the left side of his body paralyzed. During a year and a half of rehabilitation, he had to work hard to get his life back and had to learn many things like singing from scratch again. While the doctors were saying that it’s very unlikely he would ever be able to continue with acting and show business, Alex was trying to find a new place behind the camera as a director and screenwriter. In 2013, the moment he was able to work again, he made his first short movie, called “DAD“- as screenwriter, director, editor, and composer, and gets with it numerous Awards on International Film Festivals.
Alex has made it – today he is back on stage, proving the doctors wrong.

With that fierce imagination, anything-is-possible attitude and boundless capabilities to turn captivating ideas into reality on any medium, there’s no telling what Alex Sparrow will do next.