RYL: tell us about the title of your last album ; are you happy about the work you have done so far? What it does mean for you lyrically speaking?

Kings Harem: Our Album is entitled, “All Access Pass”. Lyrically speaking it’s a message to you. Come and join us. Here’s your pass, come on in!

We are very happy with the tracks released. We will also be translating the verses into Spanish. This is very challenging lyrically.

Some words have different meanings and need to be sang in a different sequence.

RYL: What “alone from you” means for you?

Kings Harem: “Alone From You” is a about reaching the point of break up in a relationship where you’ve had enough!

Kings Harem: Hmm. Sort of. A quadrille of seasons and personal evolvement. Beginning with an Alice in Wonderland squeaky door, opens up to a whirlwind starting off the song “Shake It Up!”, a journey of a bands dream to rock stardom giving it their all.

But not without sacrifice. The storm turns to thunder and lightning as “Alone From You”, starts out with heavy rain, it brings you down to the bottom of despair. Then less rain segueing to “Down By the River”, a nymph like song that allows you to dream for something new again.

To end up with “Feels Real Good”, a journey of fantasy and the thrill of the chase.

That’s on the album, you don’t hear it so much on the single tracks. Note: Inspired by Russian composer, Igor Stravinsky, “The Rite of Spring”.

Kings Harem: “Alone From You”! If you’ve ever been stood up on a date, standing in the rain, you’ll understand the anger and frustration of the lyric.

Kings Harem: Most of the time, I write the lyrics or themed ideas first. Then adapt the verses to the music. Same with the chorus too. Lyric hooks that I may have written get filed on loose paper in a folder or written down with a ruled box around it for safe keeping. I’ve also used napkins, toilet paper, paper towels, gum rappers, you name it.

I don’t want to lose an idea just because of being lazy.

Musically I will either write it down or record what ever is in my head directly to computer or cassette with what ever instrument passage is haunting me.

I always have a mic ready to go. Sometimes I’ll play it for the guy’s in the band and they take it to the next level of greatness.

These days, I’ll speak it or hum into my iPhone. Done! lol 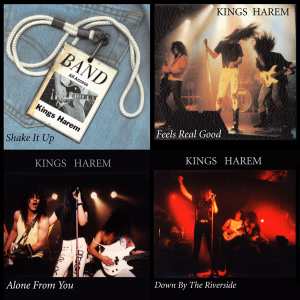 RYL: What inspired “Down by The Riverside”?

Kings Harem: The band needed a sing-along song for the middle of the set list. I was camping one weekend and I brought an acoustic with me just incase.

I took a walk by a stream and started to hum as I was walking. I stopped and ran back to my tent to get the guitar. Found a flat rock and listened to the waters accompaniment. Wow. I was that fast. Grabbed a pen & paper and proceeded to follow the lyrical stream of dreams!

Kings Harem: In the song, “Lost Without You”, on our forth coming album.

Kings Harem: “Wrath of Vengeance”. On our new album.

Kings Harem: This summers project is to finish our album! So touring is out of the question. We have been asked to play and open for some acts but we had to gracefully decline. However to keep in the spirit of playing we go on virtual radio tours instead.

Making guest appearances in chat rooms with fans taking questions, etc. Coming up Sunday July 19 from 7-9PM is a live radio interview with the whole band. You can hear us by logging onto www.digitalrevolutionradio.com.

We find if we can’t tour at least stay in touch! Since our singer, Ruben Gomez, is an ex-Menudo member, we have a lot of people in Latin America to stay in touch with. Social Media is the best way to do that.

RYL: do you remember how you wrote “Feels Real Good”?

Kings Harem: “Feels Real Good” was one of those songs that was written with both lyrics and music at the same time. I was in my studio and the opening guitar hook popped into my head and it wouldn’t go away like an annoying fly saying.

Write Me! Write Me! I’ve learned it’s best to follow the fly and see where it would lead. So I laid down on my couch and started composing in my head for about 5-10 minutes, just for direction and structure.

Then I started writing it down using an acoustic guitar as reference. I finished a ruff draft from beginning to end in about an hour.

Too make them “Feel Real Good”!