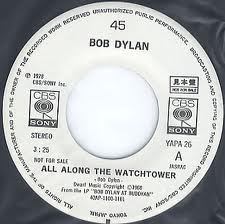 All Along The Watchtower – Bob Dylan

You would ever have imagined that All Along The Watchtower has apparently taken some references from the book of Isaiah?

Well, if you read these (chapter 21, verses 5-9), you will find out that Bob Dylan, right after his motorcycle accident of 1966, might have taken inspiration from it.

The song’s verses are talking about a conversation between two men, a jocker and a thief, that  discuss about how difficult is to understand how hard the life is far away from banquets and wine.

It is quite interesting to notice that the end of the lyrics are representing the beginning of the song; basically Bob Dylan “plays” with the listener giving to the song an unexpected end.

The song has been released in 1967 as part of the album “John Wesley Harding” (by the way, do you know that its title was misspelled by Dylan? He wanted to refer to John Wesley Hardin, an outlaw of the old-west, but he added a “g” by mistake) and had a huge success, also due to a fantastic cover made by Jimi Hendrix that (almost) out-shadowed the Bob’s version.

Bob Dylan would have said that, every time he sings this song, it is like is dedicating it to Jimi.