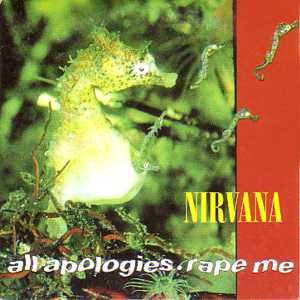 “All Apologies” is a song that was released as a third single extracted from the album “In Utero”, for many the best album of Nirvana,for sure the most introspective.

The album is dated back in 1993 and it was produced by Steve Albini that later will say he didnt do that much, since the band created it in only three weeks, making each song, each sounds “in just one take”.

This will be the final album of Nirvana, a band that , as we all know, made the history of grunge and modern rock and roll.

In Utero, that initially was supposed to be called “I hate myself and I want to die” will not sell like Nevermind but it is believed to have reached 8.000.000 copies to date.

All Apologies is a song that has a very “weird” lyrics, the meaning would have been very hard to get , unless it was for an interview of Kurt that explained that it was dedicated to Courtney Love and their daughter.

The three of them in the sun evoched in the mind of the singer a sense of peace, being far from the society, being far for what is required to say in order to be politically correct.

The sun is the redemption from all the sins, family (the life with the family) is the way to escape all of it.

We hope he found finally the sun, as he said, being buried was just another way to reach eternal peace.