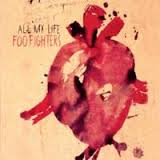 All My Life – Foo Fighters

When they wrote “All My Life”, Foo Fighters were looking for a different sound, much heavy than the one in their previous albums.

In 2002, they released their fourth studio album titled “One By One”, All My Life was their first single.

First time we heard about it we were surprised, but, reading in a different way its lyrics, we believe it is truly related to female orgasm…..

How will you comment this verse for instance? “Don’t let it go to waste, I love it but I hate the taste”