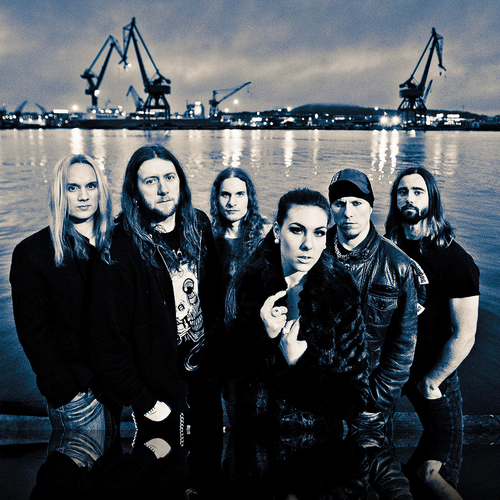 After a great success obtained with the album “The Nexus” and just before starting the American leg of their Tour, Jake E answered to our questions regarding Amaranthe (http://www.amaranthe.se) , their lyrics and the passion for the music…

Believe us, you should not miss this!

RYL: Let’s talk about your great new album “The Nexus” just released few months a go, how is it going? We heard you are having a huge success!

A: Jake: I don´t know where to start. We went up on the charts in a lot of countries around the world, and the album went in on #1 on the American metal I tunes list. And scored really high all around the world. Sweden #6 and Finland #4 just to mention some!

And since the release we’ve been out on the road with more or less no break. We’ve done 60 shows since March 10th and this cycle will continue til the end of the year.

Next up is Graspop and Tuuska and followed by 2-3 festivals every week. In July we will head to the states to start our first headline tour over there and it´s something we´re all looking forward to!

RYL: Thirteen new songs, one more powerful than the other, our favourite is “Future on Hold”, can you tell us its true meaning?

A: The whole album is some kind of a concept album (so was the debut) but in a very diffuse way. We have never told anyone any deeper meaning around the story but “The Nexus” album continues about 70 years into the future after that the story on the  “Amaranthe” album ends.

As you can see in The Nexus video. We’re all waking up from some kind of CRYO sleep.

“Will I wake with a life to remember. Now I’m frozen and cold. I am left alone with an empty soul. As I put the future on hold“

The main character wakes up in the future and his future was put on hold as “they” froze him down.

RYL:  How do you write your lyrics? What inspires you?

A: I like to play around with a story in my head. The story is created by me and Olof (guitar) and I tend to see the story line being played in front of my eyes like an action movie.

The two albums we’ve done so far could easily be a script to a Hollywood movie instead of lyrics to a heavy metal band. And I found this very interesting.

Just see our videos and you’ll understand what I mean!

I’m inspired by this whole thing in my head that grows by it self but  I also find a lot of inspirations in movies! Me myself doesn’t listen to much music so movies is my way of filling up my my inspiration center 🙂

RYL: What inspired the song “The Nexus”? We have seen the video…it is really cool! …Never mess up with you…you can hit very hard…..

A: HAHA well in the videos it’s all of us in the band present but we’re actually just representing the character from the album.

I would actually like to do a video without us in it at all and just bring actors in it. We’ll see about that in the future.

RYL: How difficult it was for you to emerge in the Metal scene?

A: Well. Me and Olof just started this band for fun in the beginning. And all of a sudden we’re touring all around the world. It’s a pretty cool feeling when you look back on this 3 years as the band’s being active.

So I’s say that we’ve had no problems at all coming in the the metal scene.

But all of us (except Elize) have 10 years in the scene before Amaranthe with other bands so we weren’t unfamiliar to the environment so to speak.

RYL: Europe is in a huge economic crisis, for the young bands is getting harder and harder to have “that opportunity”… to be noticed and to obtain success….What do you  suggest to them?

A: Well I´d say that If you really want something. You’ll get it sooner or later as long as you keep fighting for it.!

I been fighting and chasing my music career for 15 years and I never quit dreaming.

I never had a real 9-5 job, Didn’t brought a car or an expensive loan for a house etc etc which made it possible for me to focus on the music. As long as you’re comfortable fighting there’s nothing that can stand in your way!

RYL: In 2011 you released your first album “Amaranthe” that had an almost immediate worldwide success, how your music evolved from that moment till now?

A: We have our mold of composing music and how it sounds but as anything else you learn by your mistakes and you learn new stuff everyday.

RYL: How important is a song like “Hunger” in that album?

A: Hunger was our “hit” single which made people find us in the first place so it’s an extremely important song!

RYL: The community of your fans is getting everyday bigger and bigger, how do you interact with them?

A: We’re trying to keep in contact and answer all the relevant e-mails. If people having trouble getting the cd our if they cant find info for a show etc. It’s amazing to see the fan base growing in front of your eyes nowadays as you have FB twitter etc

RYL: Before the end of our interview we want to ask you about one more song included  in your last album: “Burn with me”. How you ended up selecting this title?

A: It’s an old song that I wrote 5-6 years ago I don’t remember why I choose the title but I was really angry at someone and when we started writing for this album I found it and Olof forced me to have it on the album. 🙂 I don’t regret that now because it turned out to be a fantastic track!! and the video for the song was just released and hit 141,355 views the first 2 days which is amazing!