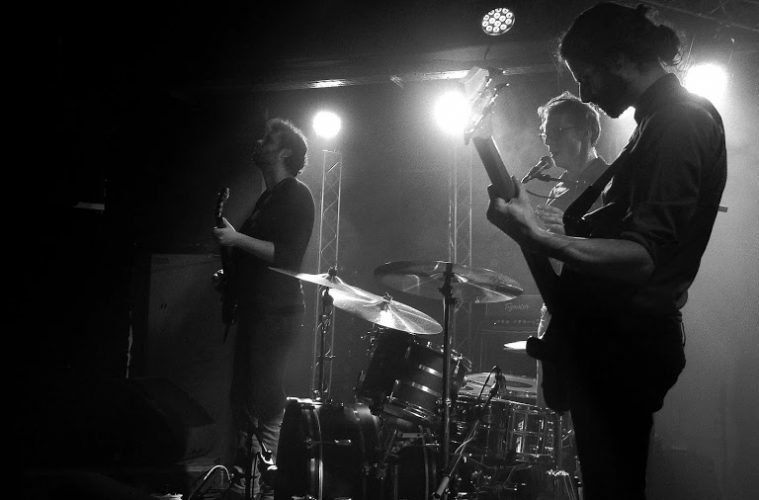 When I’m composing a song, writing the lyrics is almost always the last part of the process and, then, although it’s not set in stone, the vocal lines are already written when it’s time to get to the words. In that respect, I go back and listen to the rhythm and sonorities of the sung mumbo-jumbo I’ve already recorded on my daw as well as the overall colour of the song and figure out what kind of story I want to tell, based on what all of this evokes.

First thing: (general and individual word/sentence) rhythm; no question. It has to fit perfectly in the music so that none of the two aspects of the song works against the other: you don’t want an unending babbling or sentences that don’t fit inside a riff. Or the other way around. You want music and words to complement each other and not stand alone each in its own corner. Then you have to understand sonorities; whether it needs to be up or down, whether it needs to rhyme or not, needs to be harsh or smooth, etc. Finally, the meaning. It needn’t necessarily make sense to everybody and be crystal clear but you have to want to sing your song to sing it properly again and again. But there’s absolutely no obligation to have a strict order of importance when writing. Actually, it would not be very efficient if you did since if, for instance, you were only relying on rhythm to write your song you’d find yourself trapped in pure technical boredom. All of those «categories» need to work together because lyrics are a whole. So it’s all back and forth. At least that’s how I consider it.

Actually, no because I write for and about humanity in general or sheer concepts and I very very rarely have myself in mind when writing a song. Although, obviously, it comes from my perspective, I only make up stories and mostly speak of somebody else, whether it’s a single person or a group, directly or not, as a narrator or as the subject itself. And that’s one of the reasons many of the characters I sing about are women.

I have no idea, frankly. I try to be as involved as possible in each and every song I write. Sure, some I prefer to others but there’s no lyric that gives me the unique chill  and, when sung, makes me think something like «damn, this one is sooooo good!»

What inspired “Dead Inside”, part of your latest album «…and Rise People, Rise!»?

Well, actually, it’s just a common broken heart-song. Except, of course, that I usually tend to want to push the stories a little bit further. Relationships is a tough subject because it always is  about one’s point of view so, if you don’t want to get straight to the «I love you, yay!» or the «she won’t come back, I wanna die», and at the same time not be spreading, in details, your own personal life all over the place, you have to dig deeper and find a situation everybody has known at least once. In that case, it would be not being on the same page with the other part. And that’s what this song is about: a girl who wants to have fun, drink champagne and bang anybody she finds attractive, when the guy she’s with, apparently, hopes for something else. Of course, it wouldn’t be an issue (except for the guy, obviously, but that’s his problem) if she wasn’t the kind of person who likes to destroy the other one by degrading them («bye, sweety, you see my boy, it’s over, I really need another man, a real-real man») instead of just breaking up clean. To that must be added two things :

the choir (like in the ancient greek theatre) that is here to sum up the story from an omniscient perspective and, because I didn’t want to use the simplistic pattern bully/victim I do not much believe in, for that kind of subject at least, the bridge of the song that gives voices to the guy who may not be as a innocent and disconnected from reality as it may have appeared in the first place.

The Widow is the perfect example of what I described when responding to your first question : I listened back to what I previously recorded on my daw and it came to me as I was staring at a window, the same one she’s staring at, at the beginning of the song.

Do you remember the day you wrote “Salvation”?

We are working on a new set that will include some of the new songs for an upcoming tour that should happen during the first quarter of 2019.