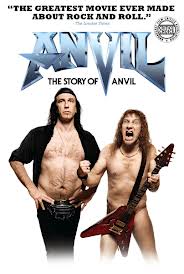 Anvil ! – The Story of Anvil

Do you know the Canadian heavy metal band Anvil?…. No? Shame on you! 🙂

Well, to tell you the truth, we didn’t know as well until we bought their movie “Anvil! The story of Anvil” released in 2008 by Sacha Gervasi and presented to Sundance Film Festival.

The documentary talks about the history of the band that went from playing together with Bon Jovi, Scorpions and Whitesnake to the absolute anonymity.

Why this happened to them? Maybe because of a lack of management? maybe due to a wrong independent record label that didn’t push them as they deserved?

They disappeared from the international music scene for almost 25 years even if they never stopped to release new albums.

The documentary covers the story of the release of their 13th album named “This is Thirteen” and the hopes and dreams of two “soul brothers” the drummer Robb Reiner and the singer “Lips” Steve Kudlow.

The two of them are more than just 51 years old bandmates, they are friend for life, with only one dream: make it in the rock n roll world.

Will they succeed in their dream? Will they survive a crazy European Tour?

This thirteenth album will change their lives once for all? You will have to watch the documentary to discover it 🙂

ANVIL: THEY MADE A PACT TO ROCK TOGETHER FOREVER. THEY MEANT IT.