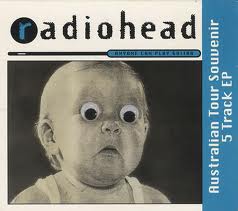 Anyone can play guitar – Radiohead

“Anyone can play guitar” is a song part of the first album of the band “Pablo Honey” of 1983, released as second single.

The song talks about, London on fire, playing guitar on the beach and Jim Morrison….

Now…. would you tell us the meaning of this song? Challenging isn’t?

We can’t really say what Thom Yorke was thinking when he wrote it, but we will try to give our version of it…

The all song is about being a rockstar and doing rock and roll…. actually it is a criticism to it because anyone can play guitar, so we can all be rockstar in this world.

And, if everything will collapse (London that burns and the world that turns), the world will leave you with nothing in your hands than your guitar…(in that moment we hope you can really play it…. 🙂 )

The solution seems to be like Jim Morrison, that become an eternal legend of the rock and roll and he didn’t had to face the world…..he died quite young.

But then, surprisingly, at MTV beach, Thom addressed Jim as “Fat, Ugly and Dead” referring to the last days of the singer of The Doors…..

Jim wasn’t playing guitar but he become legend, why this couldn’t be reached by anyone?