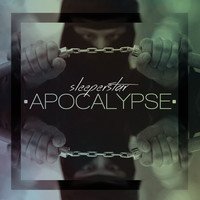 Sleeperstar (Chris Pearson, Nick Box, Jake Lester, Shaun Menary, and Geoff Ashcraft) is proud to announce the release of their new single, “Apocalypse.” The song is the first single to be released off of the band’s upcoming album, LOST MACHINES.

Sleepestar’s guitarist Nick Box said about it: “It’s a big day for us. This song has taken a lot of twists and turns. There are at least six completely different versions that we’ve tested out over the years. We always really believed in the song, but we wanted to get it right before we released it.

I’m glad we were patient, and I’m pretty proud of it now. I hope everyone likes it.”

The video for the song, produced by Jordan Laessig, is a great fit for the band. Contrasting the seriousness of their music with the silliness of their personality, the video shows a group of ninjas destroying piñatas while the band performs “Apocalypse.”

The video can be seen at http://groundsounds.com/2014/08/11/sleeperstar-apocalypse-gs-premeire/

Shaun Menary, drummer of the band said: “It was such an incredibly fun video to make. Who hasn’t dreamed of dressing up as a ninja and running around with weapons in a forest? We all had this ridiculous idea and Jordan just made it into something amazing. I hope everybody enjoys it as much as we enjoyed making it.

“We love the idea of our fans going nuts in their own way to support this video. Dress up as ninjas, smash up piñatas, take a selfie with a ninja mask, we just want people to have some fun and tag it so we can share it with the world,” explains .

DONT FORGET to check Sleeperstar.com in the coming weeks!! There will be more announcements regarding upcoming live performances as well as Lost Machines preorder packages.