Aquapalooza presents: AQUALOLLARIUM – Miraculous creatures above, in and under water

Forget the river Spree, forget the lake Wannsee, Aquapalooza is the place to be when it comes to cool water! That means? Right in the Olympic pool, we will create an extraordinary world: mermaids will emerge from the water, a ballerina will float above the pool and artists will demonstrate their skills to atmospheric sounds. Expect a great show!

Entrance via the Lolla Fun Fair

At the time-honoured Olympic swimming pool, the magic of music conjures a wondrous world: mermaids emerge from the water and move synchronously through the pool in which athletes once competed against each other; a ballerina floats above the water, light as a a feather; mythical creatures climb up and down ropes and fly through the air in balloons; and a redhead emits balls towards the sky like sparks. 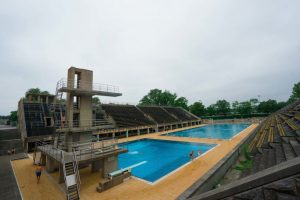 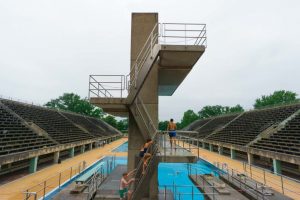 It’s a show permeated by all the elements; a spectacle which captivates the senses and conjures a magical glow on everyone’s face – young and old. From contortion to vertical ropes to juggling, handstands, harnesses, air rings, water ballet and synchronised swimming – all these disciplines merge and catapult us into a dream world from which we emerge only after the music falls silent, and we incredulously rub our eyes in front of this quiet backdrop of the past. AquaLollarium is a major highlight at the fourth Lolla Berlin edition.