Art At The Park – Lollapalooza Berlin 2018

WE PAINT THE MUSIC YOU LOVE TO HEAR 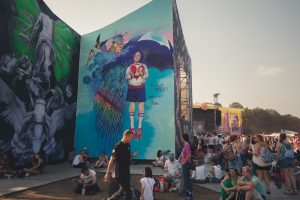 Urban Nation and the Lollapalooza Berlin have not only linked a strong partnership since the first edition of the 2015 Festival, but also the common mission to bring people together with art and music. “We share a strong belief that the two are intertwined and that together we can create wonderful art experiences for all festivalgoers,” said Yasha Young, Executive Creative Director of Urban Nation.

For the past three years, the creative focus has been on unique, walkable art, the “CUBE” , which you could not only step into, but interact with. Up to ten artists immortalized in it with large Murals. This year we take the whole thing to the next level and have nice surprises in store for you. 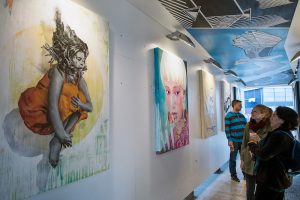 With the relocation of the festival to the historic Olympic Stadium and the Olympic Park we wanted to pay tribute to the stunning architecture and history of the location. On top of that, we’re curious to see what happens when we connect three urban artists with three headliners , true to the motto of Urban Nation’s artist exchange program: “We paint the music you love to hear.” Bands and artists will work closely together, inspiring each other and get creative. Musicians contribute a song or lyrics, the artists turn these into gigantic murals. 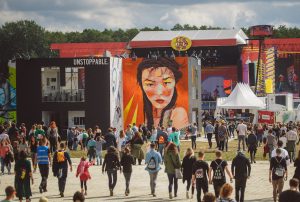 This year, phenomenal artists such as pop culture icon Sandra Chevrier (Canada) will collaborate with The National, the internationally known stencil artist and activist Ludo (France) with Imagine Dragons and the twin villains HowNosm (USA) become Kraftwerk’s music with their huge multidimensional Murals express. All three will immortalize themselves on the facade of the Olympic Stadium with unique and exclusive works of art and let Lollapalooza Berlin create the largest open-air gallery. The artworks are inspired by the music, but also the band history of the musicians, but also the form of the concept album and album cover design in general.