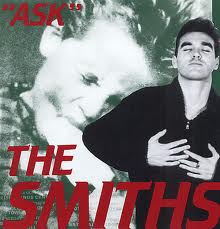 It was the summer of 1986 when Johnny Marr and Morrisey, part of the band “The Smiths” wrote “Ask”.

This song has been released few months after, in december, as single, but it was never included in a specific album of the band (it appeared in various compilations or greatest hits)

The song talks about shyness and coyness.

Most probably,Morrisey written it while he was writing a letter to a girl in Luxembourg (we don’t know why buck-toothed (maybe a kind of a joke) and we cannot explain it to ourself first 🙂 ) about the love he had for her.

Shyness could have killed all this (potentially good) relationship, by both side.

As the lyrics are saying there are only two things that can make this relationship work: the first is love, the second is a bomb.

According to many the bomb is symbolic for destroying the barriers create by the shyness.


We should not allow ourself to be limited by shyness or coyness, we should try….always… what we have to loose?

Morrisey and Marr are granting to us immediate happiness