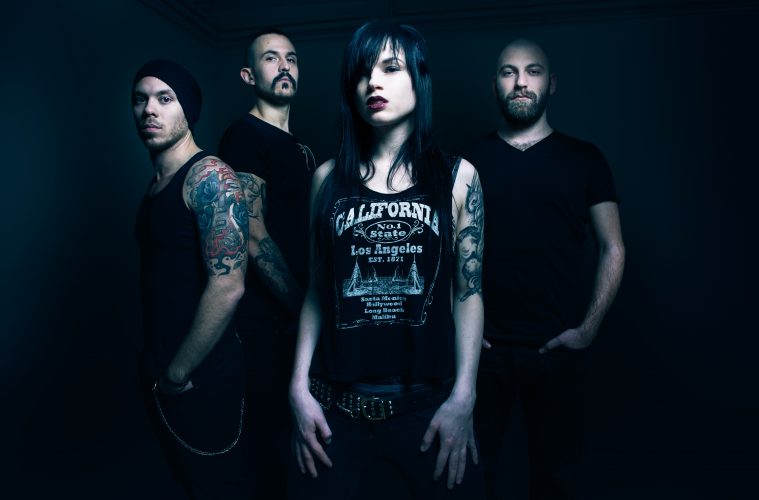 Let’s talk about your  album “Astoria” released in 2016, is there a link/something that connects all the lyrics of the album?

Astoria is our new-generation album. This fact is for sure something that connects all the lyrics. The band split up in 2014 and me, as an only former member continued the road in 2015 with The Hellfreaks, with a new spirit, new energy – and as a result –  with a bit different style. Astoria was the first record with the new line up, so there was no real concept behind it or any good old recipes, but it was the first milestone as a new band and that makes it more special than any other album of ours to me.

It’s hard to pick out one song, because there is no song that could summarize all of them, but even tho, I would choose “I’m Away”: this album is the symbol of coming back from the unseen, it’s our shout out of “ We’ve been away, but we’re back stronger than ever”!

Are you ever scared of revealing, aspects of your personal experience, to strangers through your music?
Not at all. I believe that only personal aspects can bring a song alive.
Our first 2 albums have been my very first steps as a singer and lyric-wise – even though there are many horror elements involved – they’ve been like fairy tale books.  It has been great fun, but after a while, especially when the band became a bit bigger, I just didn’t want to “talk without meaning”. I wasn’t empty, but my words were empty  and I didn’t want to continue that way anymore. That’s also one of the reasons we moved on to the new sound, that we can call our own now.

Now I base all of my lyrics on personal experiences. Of course I don’t want to smash my sorrows right to the listeners’ face, but I’m happy to share the emotions behind it as directly as possible. I’m getting pretty naked in my lyrics and you can blame me for that, but I believe, that there is no other way to be unique. There is also no other way to be true. As a singer you go through an emotional roller coaster while you’re playing your set on stage. If you are able to catch the audience at your ride, then you will have a spirit that unites all of you and that is able to create some very special time at your concert. But if there are no personal aspects, no emotions behind the words, than there is also no ride you could share with your audience. So I’m way more scared not to involve personal aspects to my lyrics, than to involve too much.

What has your journey in the music industry been like up to now?
We’re a band from Hungary, Budapest, which is quite in the middle of nowhere in the international rock world . We’re a punk rock band and are pretty unique in our country. There are just very few bands who are into rock music with a girl in the front, but definitely no punk rock bands with a female singer. But somehow,  with a bit of luck and hell lot of work we managed to play way more shows over the border than in Hungary. We played over 200 gigs across Europe and also made it over the big pond and toured in the US.

We’ve released 3 albums and a couple of videoclips, which count more than 6 million views together. We’re very happy about how things turned out but we swear that we’re still far from the finish line!

What was the soundtrack to your childhood?
America – Last Unicorn
I really loved this cartoon in my childhood and watched it over million times on VHS cassette.

What was the first record you ever bought?
I didn’t have money to buy a new record, so I bought my very first CD at a second hand shop: it was “Dookie” by Green Day. 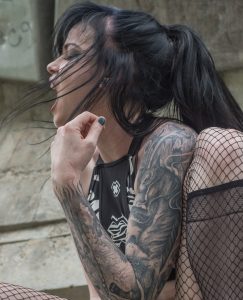 What is your favorite song (not written by you) lyrically speaking?
No way I could pick out one.
What I discovered not so long ago is K’Flay – her lyrics are mindblowing.

What inspired “I’m Away” ?
The song is just about this feeling, trying to find your own way, which sometimes means leaving your previous life behind. The lyrics were based on my personal experience: I live now in Budapest, however, I grew up in Vienna and  lived in Berlin for several years before. We wrote this song in the period when I was moving back to my hometown. Back from Western Europe, where life is way easier (because it is), to my little Hungary, where the country is not living its best days. But I didn’t regret this decision for a second: it was great to live in Berlin, and it was great to come back.

We don’t think it is our duty to tell you what is the right thing to do to feel at home in the world, we’re just trying to urge you through the visuals and lyrics to think twice before you make a decision.

Do you remember the day you wrote “Rope”?
I was moving back from Berlin at that time and I was focusing on building  a new restart in my hometown. I still could feel and understand the western mentality, and I could also see and face the eastern mentality. I wasn’t split – it just made me understand the world a bit more. That’s why “Rope” is also more a conversation and not written from one aspect. But if you check the chorus, you will know my own point of view.

What inspired “Come Around”?
It’s about people who try to walk the easier way based on their own created, false and fake world. About those who try to manipulate their surroundings so that they never have to face who they really are.

What is the best show you ever played?
That’s like picking out the favourite of your own kids. Way too many to mention.

What are your plans for 2018? Maybe a new album?
This year is going to be a VERY important one for us, as we are finalizing our 4th album. Of course each album is important, but this one is more than special:
Our first album was our first steps. Our second one was still in our infancy, our third one was written with the new members, but we had to deal with killing time pressure.

Now it’s the first time we work on each track till we’re 100% satisfied. We also have some very interesting co-operations and changes on board that we’re not allowed to talk about yet. So this might be the most important year ever for us, as this album is a huge step towards the direction we’ve been heading for a while.