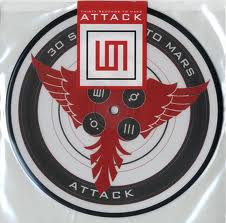 “Attack” is the lead single of the album “Beautiful Lie” released in 2005; it has been written by Jared Leto, singer of the band.

At the beginning this song was not supposed to be released together with the album, it is due to the “push” given by Josh Abraham (producer of the album) that the band decided to record it.

The lyrics are about endings and new beginnings…. a relationship that ends and getting out of a bad relationship.

Without his girlfriend he can finally be free and look for a better life even if she wants him back.

He is “attacking” a new life, he will not tolerate her to holding him back.

Some sources said that these lyrics are related to drug issues; we believe these are related, in general, to the weakness of every human being and the ability that each of us must have of setting ourself free from the things that hold you down.