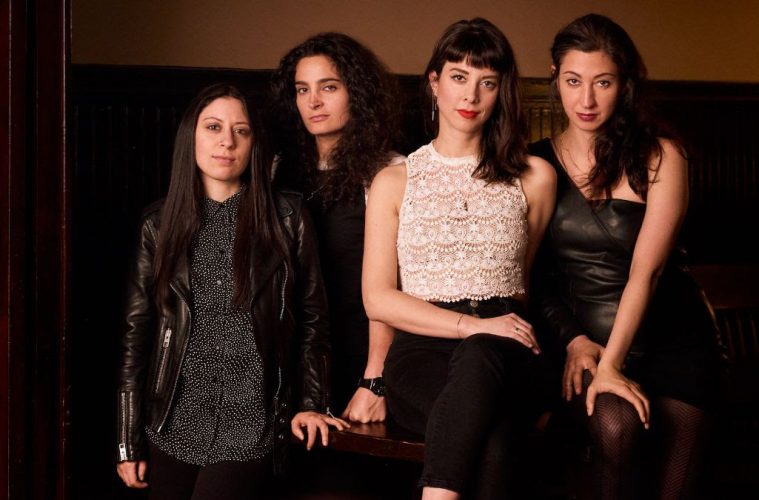 Typically I write lyrics after the music has already been composed. I like to think about the vibe or tone of the song and then play with ideas from there. A lot of times what I write is based on personal experiences, but I’ve been experimenting more with other points of view, exploring archetypes, etc. I do tend to free-form write in my spare time and from that sometimes I stumble upon a line or two that feel special and will influence the theme of an entire song later.

Being honest. Not comparing yourself to others. Sometimes I can get hyper self-critical and that can be so draining. But it’s like as soon as I can exhaust those emotions I’m free. I just get to this point where I’m like, I don’t care if anyone likes this, I don’t care if this doesn’t make sense, this is what I want to say and I’m going for it. As I’ve gotten older, I’ve cared less and less about the things that used to trip me up in the past. Words flow so much more easily when you just allow without judgment.

Not really. Writing music is deeply therapeutic, and I feel like the more honest I am when I write, the more relatable and real the song feels. I’ve never written a super explicit song like, “Joe Smith is a dick” (hahah but maybe I should? Sorry for anyone named Joe Smith out there, that was literally the first name that popped in my head), so I suppose it never scares me. I also really enjoy when people like to put their own spin or have a different interpretation of what my lyrics mean. That’s such a cool part of songwriting. If someone really wants to know what I was writing about, I’ll tell you, but if it means something different to you and has created meaning for you, that’s cool too.

Oh boy. That is a tough question. Maybe because I don’t tend to think about my lyrics that way. They are ever-evolving. I might adore one thing today and reject it tomorrow. I absolutely love writing though. It’s in my soul. But I’m never like, “I’m a lyrical genius! Look at my creation!” I’m always striving for meaning and love to play with words, that’s for sure. I don’t feel like that’s a great answer to your question. How about this, on “I Don’t Know How to Dress for the Apocalypse” I really love singing the lines “ooh I’m paranoid / we’re cosmic dust swimming in a void / reincarnated just to be employed / waiting to be crushed by an asteroid” – that to me, is a super fun play with words. I know a guy who got some old lyrics of mine tattooed on his rib cage, so for him those were probably the most meaningful. Those were, “Today deserves my company. The past is past and we can’t ever change a thing.”

We were at practice and were talking about our grey hair growing in. I mentioned that I wanted my hair to be long and grey so I could look like a sorceress. We laughed and I decided that I wanted to explore that archetype for that song. Partly, because there is such a stigma around aging for women in our society. We’re not supposed to get wrinkles or grey hair or any of those normal/natural body changes everyone goes through because we lose “value” in society’s eyes. I wanted to call bullshit on that. Aging has brought me happiness, clarity, self-awareness, self-sufficiency, and more. Also, it truly is the season of the witch. That symbol has made such an empowering comeback for women, female-identifying people, and people who are open to tapping into femininity over the last few years and I am so into it. To me, a sorceress represents the idea that we already hold all of the power we desire within ourselves and that our connection to nature, which contains so much depth and knowledge, is easy to tap into. There’s work and practice involved sure, but anyone can do it.

And “I Don’t Know How to Dress for the Apocalypse”?

I think it’s safe to say we are in a time of extreme political upheaval and unrest. The planet is dying. We have corrupt leaders who put money above all else. It is downright depressing. I wrote “I Don’t Know How to Dress for the Apocalypse” as a cheeky way to deal with all the feelings associated with what’s going on in the world today. It’s an uphill battle, but there’s some solace in knowing we’re all going through it together.

Do you remember the day you wrote “Dating?”?

I remember talking to Sunny about it. “Dating?” is about Sunny’s ex-girlfriend and the end of their toxic relationship. For this song, we had the theme in mind before we began writing the music, which was a new approach for us. The idea was essentially that it was going to be about the end of their relationship told from my perspective saying “don’t go back to her. Don’t make the same mistake.” I had Sunny email me a list of all the shitty things her ex did during their relationship and used that as inspiration for the song.

It’s funny, I’ve had a couple interviewers ask how we wrote such a “dark” album, but I don’t necessarily view it that way. There’s songs about empowerment and love and yes a little bit of darkness too, but I think it’s balanced. I guess the common link is that each song lyrically represents what I was thinking about or dealing with at the time.

I really enjoy playing with harmonies and backing vocals so I pretty much came up with those parts on my own. Musically, our engineer Jordan Lovelace had some great ideas for additions to the songs such as incorporating keyboard and synthesizer elements and playing with tape effects. It was a lot of fun experimenting together.

We will be touring with the record, probably more so in the spring. We’ve also already begun writing new material so our focus will be on that for a bit.