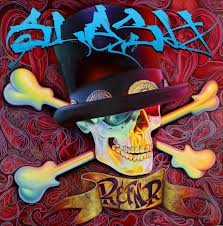 Back from Cali – Slash

When Slash and Miles Kennedy decide to write a song you can bet , this will be a great success!

It happened to the song of today, “Back From Cali”, written in 2009 and released in 2010 as second single of the first solo album of Slash.

The song talks about Los Angeles, but on a different way than expected… why? because Slash was born in London but he grew up in LA….. a city that, indeed, has taken a lot from everybody ,but that also gave the possibility to  Guns and Roses (and many others) to become one of the most important rock bands of all time.

Now, he wants to leave all the lights and the dangers of a city that doesn’t belong anymore to him.

He need help, he wants to go but he cannot do by himself…..

Trying to give an explanation to this, after reading his autobiography, we could say that this song refers to the period when Slash couldn’t cope anymore with his abuse of drugs and alcohol….fifteen year before this song has been written.

Or maybe it is just a disillusion, like anybody that really knows LA tried at least one time….

The city is attracting you, charms you, loves you….but you have to maintain your guard up, otherwise it can be very dangerous and drag you down.