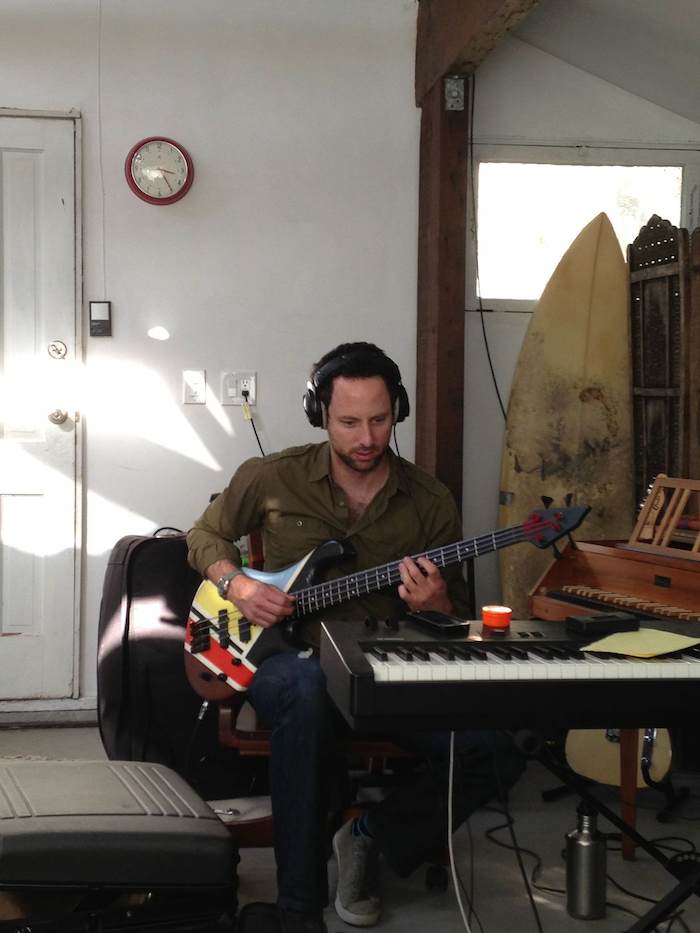 BACK IN TOWN – interview with Mateo Stevens

RYL: Your new album is titled “BACK IN TOWN”… tell us more about it…

The whole album was really inspired by my experience of reacquainting my-self with the city of Los Angeles after being gone for roughly 12 years.

Back In Town is the name of both the lead track and the album itself, and was also one of the songs we had placed in the film “Spare Parts,” so it’s a special one for us.

RYL: Let’s talk about the song “MILES TO GO” and what it means to you?

“Miles To Go”  is all about working hard and getting somewhere in life. We love the song because it has an extremely positive message, and we really felt it fit the film “Spare Parts.” The song definitely has a special place for me because when I hear it is so energetic and makes me feel happy.

We worked hard on that song to deliver what they were looking for in the film, including me approaching the artist who is the featured rapper on the track, FreeWill, after one of his shows and asking if he wanted to be involved in the song.

He was so enthusiastic about the message and the song and he killed it, and we had a great time in the studio together.

If you listen to the whole album you will hear that many of the songs have themes of being on the move, traveling, or hitting the road so to speak.

The album itself was inspired by my travels, periods of uncertainty in life, and ultimately coming back to my home town and feeling like I understood it better from being away, and that’s when I felt ready to make the album.

RYL:  Do you remember the day you wrote “BACK IN TOWN”?

I do remember it very well I had set up my studio in the kitchen for the day and was playing with the melody and the lyrics just started to flow out faster than I could write them down which is very rare for me.

RYL: how do you usually write the lyrics and music of your songs?

For the album, the writing process differed in many ways from song to song. We wrote a few songs to pitch for films, some that got picked up and some that didn’t.

We used any of that material that we felt fit the album. We also had a few songs where Erik Janson and I had writing sessions with Asdru Sierra (of Ozomatli and Abstrakto) and Zara Sky who are featured heavily on the album.

Then there were a few songs that resulted from times when I would bring ideas I had been working on at home and I would bring a few of those to Erik in his studio, and he would either like it or not, the ones he liked and really vibed on were the ones that he then worked his magic on.

He brought in some real heavy hitters, musicians and session players from all over Los Angeles that have incredible resumes to beef up the songs and get his vision for those songs out.

My favorite rock song is “La Bamba.” Here you have this kid from the San Fernando valley who’s not afraid to sing in Spanish in the 1950’s, and it paved the way for so much music in Spanish reaching the USA.

My personal favorite are the verses on the third track on the album, “All The Same”, because they tell a story.

I wanted to borrow from the country music tendency of describing something or giving a story, but make it with this rock/latin/dub feel with a romantic spaghetti western type horn part, I think it’s the syncopated piano that drives the song.

A friend told me that my verse on Miles to Go, the last verse of the song is such a departure from all of my other singing styles that it was his favorite.

The last track on the album “Only In My Mind (Stay The Night)” was a late entry to the album and it’s the last song that I have finished.

I do have some ideas floating around that I have been developing with an electronic music producer/DJ friend of mine and I am really excited about where they might lead. Its similar structures of the songs on Back In Town but much more reliant on electronic sounds.

RYL: What are your upcoming tour plans (if any)?

We have had some recent shows in Los Angeles, and hope to do a few more in the fall, no concrete tour plans as of yet, but we did a performance in Mexico in May and really enjoyed it, we met and connected with a lot of people and I would really like to do something similar in the near future.

RYL: let’ s talk about “DESCONOCIDO” and what its lyrics mean to you?

“Desconocido” was an interesting song for me since it was one that we wrote directly for the specific scene for the film “Spare Parts.”

There was a lot of feedback over the writing process from others on what they were looking for and as a result the song turned out very differently than we originally imagined it, but in a good way in terms of stretching our boundaries.

The lyrics are about being hidden on the margins of society, and being a person that no one notices, but the chorus lifts and is hopeful and touches on reaching for something better.

Ultimately I think we tried to portray the underdog feeling in the song which was perfect for the scene in the film.