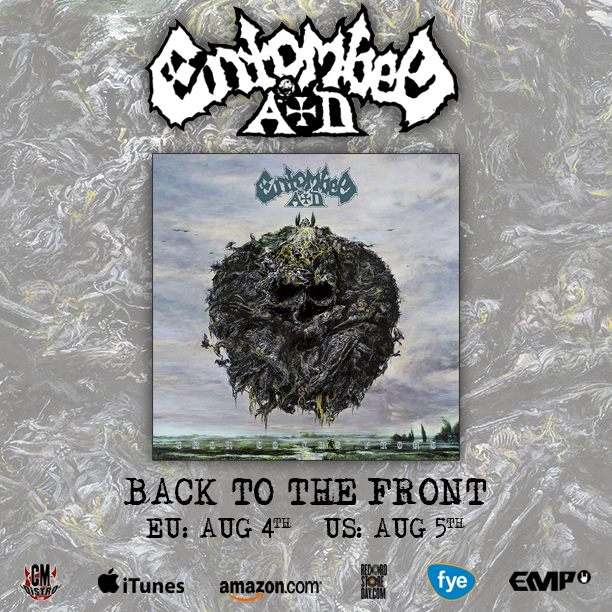 BACK TO THE FRONT – Interview with Nico Elgstrand – ENTOMBED AD

Nico Elgstrand, guitarist of Entombed AD, answered to our questions regarding their lyrics and the new album: BACK TO THE FRONT

RYL: ‘Back to the Front’ will be released in a few days, how do you plan to launch it? Will you celebrate in Stockholm?

ENTOMBED AD: Yeah we will probably get very drunk together. It’s been a long and hard journey to come to this release.

RYL: Have you already done a few gigs? How was the reaction of the fans to the new songs?

ENTOMBED AD: Actually we haven’t yet, but we are very eager to do so. Gonna start in the beginning of August with a bunch of festivals, so we shall see.  Got some very nice reviews though, so it’s looking good so far ha ha!

ENTOMBED AD: Try to find the rhythm or melody of the vocals and then just start playing with words. Or it could be that you have something on your mind that gets you going and start from there. It’s really not a set process– you have to stumble through darkness for awhile until something comes up!

RYL: Tell us everything about “Vulture and the Traitor”.

ENTOMBED AD: Nicke (Andersson) came to us maybe six years ago with an instrumental track that he wrote and said it sounds too much like Entombed for him to use it ha ha.

For some reason it ended up on the shelf until it was time for us to make the new album. We went through old material to see if anything held up and we sorta rediscovered it and said, “Hey, this is great, let’s use it!” We re-recorded it with the same arrangement as was on his demo, wrote lyrics, put vocals on it and said, “Thanks, man!”

RYL: When you wrote your last song, what inspired you?

ENTOMBED AD: I really can’t remember, probably some old movie or something. Since creativity is nine parts desperation and one part inspiration, you tend to just remember the anxiety ha ha.

RYL: Do you remember the day you wrote “Bedlam Attack”?

ENTOMBED AD: Also a song that’s been on the shelf for awhile, so the short answer is no, I can’t remember. Lyrics were written in the studio with panic that it must be done as inspiration.

RYL: What is the best verse that you’ve written?

ENTOMBED AD: Ha ha just the verse? I really don’t think of it as parts, more like a complete dish. Who cares about the sauce if the chicken is burnt to a crisp? Having said that, I think the verse on “Kill to Live” turned out pretty good. My best verse I haven’t written yet.

RYL: What is the best lyric that you’ve ever heard?

ENTOMBED AD: That’s a hard one, probably something with Tom Waits. He’s got a way with words that blows my mind!