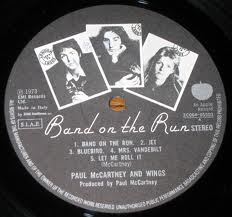 Band on The Run – Paul Mc Cartney and Wings

Three years after the break up with Beatles, Paul Mc Cartney and the Wings released “band on the run”, one of the most successful album of the band and a record-breaker with over 1.000.000 copies sold in 1974 only.

These years were kind of special for Paul that was visiting several countries in Africa and learning how to play several instruments.

Band on the run is, obviously, the  most successful song of that album; its lyrics are related to the last years of the Beatles before the break up.

It underlines that the band was about to break up and nothing would have stopped that.

Basically the four members of the band were living on a fake happiness, they just wanted to “get out of here” as the most famous verse of the song that is a phrase that George Harrison would have said during the meetings with Beatles management.

For this reason the band was “on the run” and ultimately, was about to disappear…..