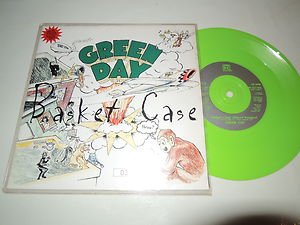 Billy Joe Armstrong, now 41 years old, is leading singer and guitar of the american band Green Day, and he is also the main songwriter of the band.

He created the band back in 1987 at the age of 17 together with Mike Dirnt (vocals and base guitar) , Jason White (guitar and vocals) and the drummer Tres Cool.

The band is pure american PUNK ROCK , together with other successful  bands as Rancid or Offspring.

Their most important album was released in 1994 with the title ” Dookie” ; the band reached over 80 millions copies sold worldwide won many prizes like Grammys,MTV Awards, Tony Awards, etc…

Lately, after the release of their album American Idiot, the band decided to create out of it a “rock- opera”.

We don’t know if you had the possibility to go and see it, we really suggest you to do it, the cast is amazing the rock band (live on stage) is great and regarding the music….obviously you should love Green Day 😉

Today we will speak about Basket Case, a song included in Dookie, the third single to be released from the album.

We decided to start with the video since we think it is amazing  and still contemporary (it has been done six years before the real slim shady of Eminem, that, in our opinion, take inspiration out of it).

Mark Kohr directed it and it has been shot in a mental institution in California (a real one!!)

Billy Joe wrote the lyrics starting from a personal experience.

Apparently he had been diagnosed with a panic disorder and he thought he was getting crazy.

The best way to get out of this situation was writing a song…..and he (luckily for us) did it.

Now Green Day released their last albumS….. UNO, DOS and TRE…..each one of these with a different music but with the same soul….

the one we are used to since eighteen years now……