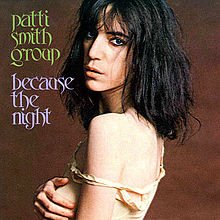 Because the Night – Patti Smith

Because the Night is the biggest success obtained by Patti Smith and one of the best rock song ever written.

It has been released in 1978 as part of the album “Easter” by Patti, while its lyrics have been written by Bruce Springsteen.

In fact, Bruce tried to release this song as part of his album “Darkness on the edge of town”, but he wasn’t able to found the perfect sound for it.

Patty Smith, as the legend says, was working in the studio next door and, once listened to the song, convinced Bruce to give it to her.

The version played by Bruce is not the same of the one Patty released; in fact, the differences between the two versions are quite marked.

While He is more focused on the story of a workingman at the end of his day seeking solace in the arms of his girl, She works more on the image, the idea of “you and me against the world”.

She is imploring her lover to forgive the strength of her passion, and for physical embrace to allay the doubts.