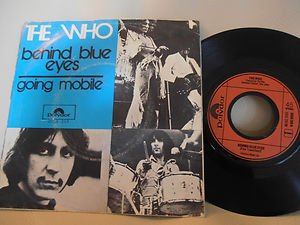 The Who, one of the most important british band in the rock history.

Important for their song, for their music but also for the members of the band that became ICONS

Roger Daltrey – lead singer – who doesn’t remember the microphone launched in the sky?

Pete Towshed – guitarist – do you know how many guitars he smashed on stage?

Their music is the explosive and electric version of rhythm and blues……their performances live are incredible ( now again in tour in USA, we all should not miss that!)

“Behind Blue Eyes” is an autobiographic song written in 1971 (the same year of Deep Purple with Smoke on the Water) and part of the album “Who’s next”.

The blue eyes of course are the one of Roger, and the lyrics are describing the real life below the appearances , it is hard, also for a rockstar with blue eyes………