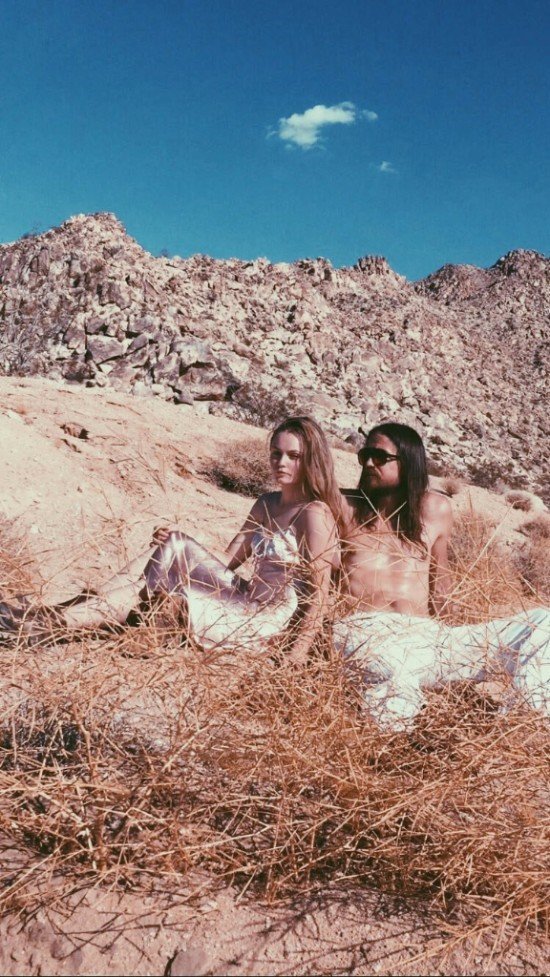 Bermuda Angels share their new video “On The Run” via BlackBook, who call the duo “enthralling techno-spaghetti-western (think David Lynch-crossed with The Knife).”

They fell in love and wrote an album together while living in the secret room of a music venue. Sophie spends most of her time in CA making songs and videos with Bermuda.

The rest of her time is spent painting in NY, where she’s from. Bermuda Jones owns The East Room, a music venue in East Nashville. He primarily lives on his desert ranch in 29 Palms, CA where he works on music with Sophie and his other writing projects.

“The album was partly inspired by our surroundings and landscapes.,” explains Bermuda “We explored the extremes of the weather spectrum in the US and spent a winter in Maine on Mount Desert Island surrounded by snow and windstorms and freezing cold, working on our sound.

A few months later, we spent our summer in an adobe in the desert in Joshua Tree, CA in incredible heat, working on our sound some more.  You could literally fry an egg on a rock outside.

We were also inspired by the excitement and turmoil of forming our relationship and planning our future together.

This seeped into the songs and overflowed throughout the album.  Developing our trust was important throughout the process and it comes in many forms.

Do I trust the other to follow through, to be honest to themselves and to me, to be faithful, to try his or her hardest, to create good music, to be understanding, to improve, to give support, and most importantly, to keep coming back. “