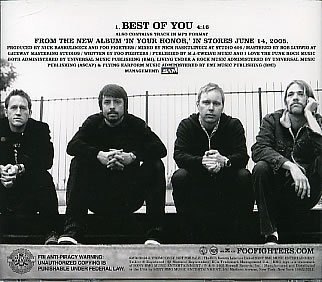 Best of you is part of the fifth studio album of Foo Fighters called “In Your Honor” a double album that has also two souls; the first one is more hard rock while the second is more blues, more acustic.

The album sold over 2.000.000 copies to date and had a very good reception from the critics.

The year was the 2005, right after the second re-election of Bush as president of the USA…thing that Dave Grohl didn’t like at all since he was supporting the campaign of John Kerry.

Did you know that John Paul Jones (bassist of the Led Zeppelin) participated to the recording of two songs from the album? AWESOME!

“Best of you” is part of the first cd(the one more hard rock) and  it has been released as first single from the album.

Once again, there should be a rule that says that, if the song is going to be trashed by the band at the beginning, if released, will become a huge success.

It happened once again with Best of You; the song talks about breaking away from the things that hold you……this certainly will cause you pain but you have to do, you cannot give in.

Even the video of the song is about the concept of pain in life, contrapposed with the joy of living it……. A new born child versus a young woman that dies in bed……