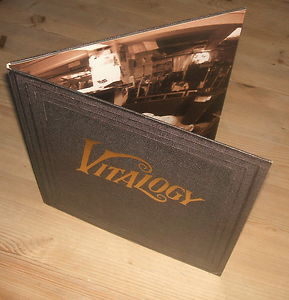 One studio album every two years, this is what Pearl Jam was used to release till 2009…..four years ago….too many in our opinion….despite the fact that they are still touring we are all waiting a new record.

They were formed in Seattle, Washington, in 1990 three years after that Nirvana, were founded.

Their music is grunge but their name comes from……….Eddie Vedder’s (the singer of the band) grandmother, called Pearl and , apparently, from a concert of Neil Young that the band particularly loved while the singer was doing amazing “jam” sessions.

At the drums there is the Soundgarden member Matt Cameron that replaced Jack Irons in 1998.

The band had an amazing success in terms of audience and records sold, last statistics are showing more than 70.000.000 copies purchased worldwide.

Pearl Jam is a band that had always been against the system, committed on following and promoting the ideas they believed in; the fight against Ticketmaster’s high cost of tickets and Bush’s presidency are just two of the “most famous” ones of the band.

In order to find out more we suggest you to visit the band’s website: http://pearljam.com/

“Vitalogy” is the name of the album dated 1994 and “Betterman” is a song extracted from it but never released as single while it reached number one position in the US Chart.

The song talks about a woman that is trapped in to a relationship with a man, but, between them, there is no love, there is just convenience …….once she was strong, now she is not anymore.

How many situations like this we see in our life, couple they stay together for interest not for love; Vedder apparently said that this song was written thinking about his mother and his stepdad (with whom, apparently, did not had a great relationship).