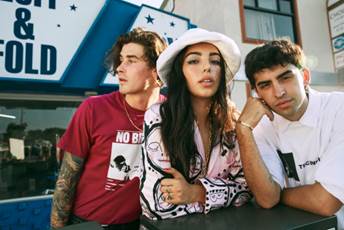 rockyourlyricsOctober 1, 201861 views
News61 views 01 min read
BETWEEN FRIENDS, a laptop dream pop project, is set to release their first single, “iloveyou” this Friday – (listen on Spotify here). Comprised of Savannah and Brandon Hudson and drummer Brennan Benko (all formerly of The Heirs, which generated millions of streams) the new project reflects the familiarity of a lifetime of collaborations together. The brother/sister duo opted for complete control of their new creation without boundaries or veils, breaking the fourth wall to create we just need some time together, a series of singles that build into their debut playlist, with their little art collective where everyone is invited to join.
The collective took complete control of the new project, taking everything into their own hands, BETWEEN FRIENDS is do-it-yourself from top to bottom, with Brandon writing the lush melodies and spearheading production from their home studio, while Savannah penned the bulk of the lyrics, focused heavily on adolescence, truth, and love, while overseeing the aesthetic of the project. Handling everything from styling and directing and editing videos to personally sourcing photography from friends or doing the shoots themselves. The result is a song, backed by a head-nodding bass line and a rush of synths, the debut single culminates on a breathy and intoxicating hook, resting under lyrics that gather the feeling and freedoms that vanish with the end of summer.