RYL: Not even one month ago you released your fourth EP “Ghost Dance”, how was the reaction of the audience after the live gig you did?

Black Delta Movement: It was amazing, a couple of the songs from the EP have been in our set for a while so people were pretty used to them by now, but the other two tracks (Emissary and MacBeth) went down a lot better than expected.

We hadn’t played them to a home crowd yet so we were a little apprehensive about how they would be received but it was great. It was quite surreal to hear people cheering you for just saying the name of your band.

RYL: Why have you selected the title Ghost Dance? Lyrically speaking what is the message behind this album? 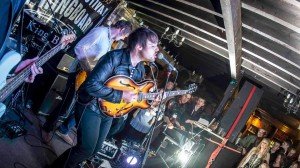 Black Delta Movement: It has a few messages to it, each song is a story in one way or another. I wouldn’t say there was a single message really, there are a few in each song. It’s quite pessimistic in parts but not in a completely negative way. I suppose I’m saying “things can be bad, yeah. It’s never that hard to put them right though”.

RYL:  How do you usually write a song?

Black Delta Movement: It can stem from a few different things, usually the music comes first followed by the lyrics. With this EP I kind of wrote into the songs if that makes sense. I knew what kind of songs I wanted to write and really pushed myself to get the vibe right with them etc. The lyrics came after, I wrote the words for Emissary and MacBeth pretty much in the studio.

RYL:  “Mac Beth” is the song that had the most success in ITunes, what is the inspiration behind it?

Black Delta Movement: I’ve been really in to a lot of heavy psychedelic music lately, me and Dom went to Liverpool Psych Fest in September and it really switched me on to a lot of drone-heavy music.

I was really in to that kind of music anyway but I saw it in another light from then. That’s where MacBeth came from, we wrote most of it in the studio which was a bit of a risky way to do things considering that we were on a clock there, it was exciting though. I’m pleased with how it came together.

RYL:  “Sleeping Pill” part of your album “Lavender House” is our favourite song, it was written under which circumstances?

Black Delta Movement: The chorus is “you’ve got my love and that’s fine” – it’s about biting the bullet and just putting yourself out there for somebody regardless of the outcome.

RYL: How do you fund your music? Have you ever used “pledge” websites like Kickstarter? What do you think about them?

Black Delta Movement: We all work but thankfully the band makes just enough money for us to get by at the moment though. If need be, we will put money in.

I think pledge websites and kickstarters are great ideas, if people are willing to give a band their money like that then you must mean something to them and that’s great. If we were to do it though, I would really want to make up to the fans.

RYL: Tell us about 2014, musically speaking what do you expect from this new year?

Black Delta Movement: The whole psych and garage scene is really booming at the moment so I can see 2014 being really exciting. There are a lot of “Psych Fests” springing up which is great.

For us, musically, I want to try and push our sound on a bit. I’d like to try new writing styles and see where it takes me. I feel like we have a lot more in us. We are incredibly excited about joining Ruby Music too! We’re really grateful to Alex Jones there and Dawn Moonan who recommended us to him. The boost it’s given us already is amazing. I feel like it’s going to be an exciting year for all of us!

RYL: What is the most crazy thing a fan did for you?

Black Delta Movement: You know what, I can’t honestly think! We’ve had some pretty strange people at our gigs before though. I remember us playing in Warrington and some girl had come up to us and INSISTED that she joins the band and we go on X Factor and make loads and loads of money.

She then proceeded to dance all over the stage throughout the gig – she did my head in to be quite honest.

RYL:  Which is your favourite song among all the ones you wrote and why?

Black Delta Movement: Man, I’m not sure actually! Depends in what sense, in terms of playing live, I have always enjoyed playing Butterfly (Peach Flavoured Hand Grenade) because of the break down in the middle, because we jam it out quite a lot it’s always felt pretty fresh to us, but on this new EP I was really proud of Is That Blood On Your Hands? and MacBeth. They both came out exactly how I wanted them to sound.

RYL: and the favourite verse?

Black Delta Movement: “My empire is falling around my feet, I can’t stop it, it’s just not up to me. It’s not Rome, but we can always dream. I bleed for it and it bleeds back for me” – Rome.

It was the first song we wrote in the band. On our first practice we got set up and I was like “I have these two songs, shall we just jam them out?” – they ended up being Rome and Butterfly, the two oldest songs in our set. I wrote Rome about my old band falling apart but I guess it could relate to a lot of other things too.