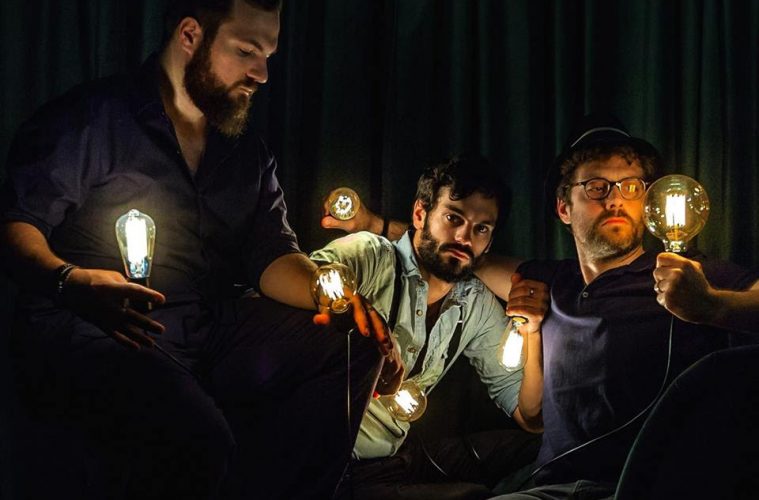 How do you usually write the lyrics of your songs?
Usually, the lyrics come naturally when we write the melodies. It starts with some random words that sound good with the musical phrases, then we come up with the full song, if we have a theme or something to write about. Most of the time, Alexis writes the lyrics. For our new album Black Haze, the process was very different. We had to tell a story along the 11 tracks of the LP. And we wanted the story to be different, depending on the order you play the songs. So writing lyrics that could fit two different stories and be still played as single songs was really tricky. It took a few months to have it all done, but the challenge was worth taking up.

In your opinion, what is the most important thing in songwriting?
To be honest with yourself. And not to try to write about things you don’t even feel or recognise yourself into. You have to write something you like, something you believe in and that makes you vibrate when you sing it.

Are you ever scared of revealing aspects of your personal life/experience to strangers through your music?
Alexis: Always! A few months after I have written a song, I read the lyrics and realise how much it is saying something about me or about the moment I wrote it. Even if I then wanted to write a fictitious story. Sometimes it is a bit scary indeed.

What is the best lyric that you ever wrote (the most meaningful for you)?
Alexis: I was really proud of our song Mesmerised. I wrote the lyrics almost ten years ago now, but I still really like them. But today I am really proud of the lyrics of the album we are releasing. On this album, maybe Anger is one of those I am the most satisfied with.

What inspired “Not A Dreamer”, part of your latest album “Black Haze”?
Not sure there was a specific inspiration for this song… it came naturally like this. It was a really “straightforward” song. In our story, it’s the moment the main character, the Dream Smuggler, comes back from the first dream he ever had and wants to forget it. He wants to go back to work, back to his routine, and pretend nothing happened. It’s also a song about hiding from your own dreams and nightmares instead of facing them.

And “Blame Me”?
‘Blame Me’ was trickier than ‘Not A Dreamer’. It’s a song about guilt, about someone who realises he’s hurting people around him. It is also about trying to move on with this feeling of guilt. We wanted it to sound poetic and epic, but not too dramatic.

Do you remember the day you wrote the song “Black Haze”?
Alexis: Absolutely. It was years and years ago. Long before we even got the story or the concept of the album. I wanted to write a song about an imaginary place. About sun and wind and dunes. I think I was feeling bored that day, that I was in a place I didn’t belong to, at a moment I really didn’t want to live. But I had to carry on, to be present for the people around me and I couldn’t escape. Afterwards, I realise how personal this song was. I didn’t have to change the lyrics when we placed it at the center of this concept album. The theme of the song was in phase with the theme of the album.

Is there a link/a common theme among the songs of the new album?
It’s even more than a theme or a link. We are telling two stories (at least) in this album. It’s really like a Rock Opera. But if we put the story apart, the main theme is our fight against our own dreams and wishes. It is also about addiction, guilt and madness (very happy themes as you can see).

What is the best suggestion your producer gave you?
We are the producers of this record. But we had an advice from a producer and it determined how the whole thing sounds now: “be confidant about each and every part you play and record, so you could put it very loud in the mix and it won’t be a problem.” That’s why we put that much effort in the whole process, so we can be proud of every little instrument, sound or thing on this record.

What are your plans for 2019?
In 2019 we really want to book more dates across Europe to promote the album. We also want to find an American booker so we can fly to the US and play our music there. It’s not a very easy thing to do for a French rock band, but we are confidant that we have our place in the US and that we have a possible audience there.

To conclude the interview a short Q/A session, please answer the first thing that comes to your mind: See you soon USA!!!