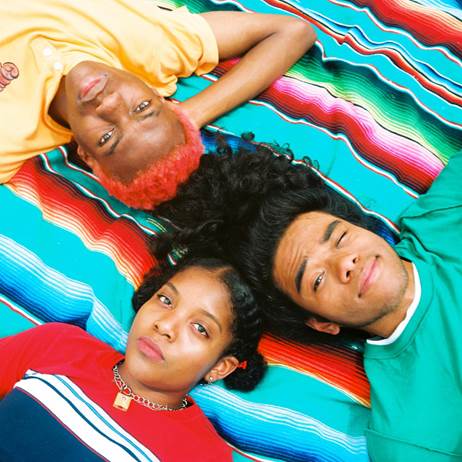 BLACKSTARKIDS have released the music video for single “TANGERINE LOVE” from their recent full-length Whatever, Man, out now via Dirty Hit. Watch below the John Hughes-esque video, which drops viewers into a house party that sets the stage for the thrills and intoxicating anxiety that come with teenage love.

The “TANGERINE LOVE” video follows the release of their album Whatever, Man and track “FRIENDSHIP” which features personal messages from fellow Dirty Hit signees Matt Healy of The 1975, beabadoobee, and more. An album intended to push listeners deeper down the Kansas City outfit’s pop culture influenced path, Whatever, Man incorporates each member’s wide-ranging influences into one body of work and is fueled by the sounds of artists from Toro Y Moi, N*E*R*D*, Smashing Pumpkins, and Weezer, to Outkast, Odd Future, and A Tribe Called Quest. Furthering the course that BLACKSTARKIDS created with their debut album, Let’s Play Sports, which embraced ’80s pastiche and its follow up, SURF, which leaned into ’90s grunge, the genre-crossing stoner-pop album, Whatever, Man, is a personal call to arms of nostalgia for their upbringing in the 2000s.

A winding maze of surprise and discovery, each of the previous singles from the album grasp the blissful DIY sound which blends garage rock with synth-punk and hip-hop ushers in a new surge of indie. “ACTING NORMAL,” for example, uses a rapid-fire style canter to romanticize aspirations of living a rockstar life and escaping the suffocating walls of a classroom or nine to five job – a nod back to their post-high school days in Kansas City, pretending to be considering their career options or future education, when deep down they knew they only wanted to make music. “BRITNEY BITCH” features The Babe Gabe singing about her aspirations growing up wanting to be a pop star like Gwen Stefani or Fergie. The TV-referencing single “FRANKIE MUNIZ,” which got the attention of the actor himself who praised the single on Twitter, blends a chugging drumbeat with Deoindre’s guitar-based jams, meeting trade-off verses between The Babe Gabe and Ty, as they rap about teenage heartbreak, and the hopelessness of not being able to get an ex off your mind. By seamlessly creating an intersection of topical and timely nostalgia and currently relevant pop culture references that highlight both their depth as musicians and witty personalities, BLACKSTARKIDS – Ty, Deoindre and The Babe Gabe – are a lovely reminder of ’90s days.

Destined for indie stardom by seamlessly creating an intersection of topical and timely nostalgia and currently relevant pop culture references that highlight both their depth as musicians and witty personalities, BLACKSTARKIDS’ shimmering Gen-Z anthems have prompted international praise from various media outlets, as well as the support of Venezuelan DJ and producer Arca.

Dive deeper into BLACKSTARKIDS unique musical mindset by listening to “SOUNDS LIKE FUN,” “TOO DEPRESSED 4 SEX”  and “LOVE, STARGIRL.”