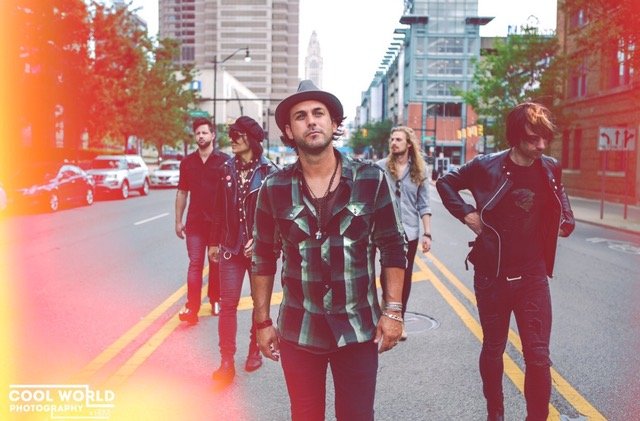 Troy (Singer): I’m usually a melody guy first, so I will mutter some nonsense lyrics to come up with melody. If I land on a line that I like I sometimes will build a song around it, but usually i will scrap the place holder lyrics, figure out the story I want to tell and spend the bulk of my songwriting time writing and rewriting the lyric.

David (Guitarist): For me it’s 3 things: a strong riff that grabs you, a great melody & a hook you want me listen to again & again. If your song is missing those 3 things it’s time for a rewrite.

Troy: I used to be scared early on because I thought people wouldn’t be able to relate, but honestly once I found out that typically the more personal I write, the more people respond. I always thought well, if I write about something so personal and specific to me, my story, how will people be able to find themselves in it, but that is the magic…people take your story and make it their own…I think as writers we have to be vulnerable and tell our truth. And the truth, real truth, is universal.

Troy: It really depends on where I am at in my life, so most meaningful is always gonna change. When I’ve gone through a bad break up, or felt wronged or had a great night, it would be something totally different, but I am at happy place in my life right now so my biggest battle is within myself and where I wanna continue to go and grow towards my goals… A lyric that gets me through and is a constant reminder and could even be a theme for this project is… ”I’m no quitter, I can be a hitter, West Coast swagger and east coast bitter” It’s obviously about never giving up, always fighting, but the East Coast – West Coast line is not only my personality, but a reminder to stay balanced… almost a yin and yang vibe. A bit later in the song I reference “sunshine motivation and Manhattan rust”…more strong imagery that adds balance and contrast. Hahah, I don’t know, that’s what I’m connecting with today… ask me tomorrow and it will change.

What inspired “Bloodshot Eyes”, part of your latest album?

Troy: ”Bloodshot Eyes” is an anthem about overcoming and making it through… how we cope with life’s struggles. Some people may have a drink with friends, some may like to get high, and some just need a good cry. No matter what is the fix or how you get there, “it will be ok if we end the day with bloodshot eyes”.

Troy: Tell me why was a song about being stabbed in the back by someone close to me. At least that is what I thought when I wrote the song. I almost feel bad now because I have since heard their side and realize it wasn’t quite what I thought… maybe I need to write an apology song! Haha!

Do you remember the day you wrote “Bloodshot Eyes”?

David: I remember I had the main chorus riff & an idea of where I wanted to take it but everything I came up with sucked. So I put the riff to the side for a bit. Then one day the pre-chorus riff came & that inspired me to rework the verse riff. The song came together 5min later after that. Inspiration is a beautiful thing & you have to stay open. Cuz you never know when it will hit.

Troy: Def, some bitterness and sarcasm, but mostly the theme is simply over coming what life throws at you.

David: Be open & trust the process. Don’t get married to your ideas. Be open to change. Cuz one idea might inspire something else totally different.