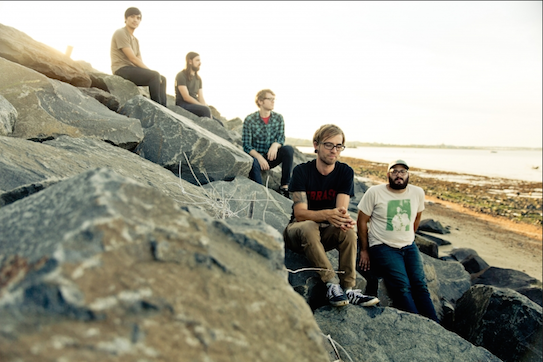 RYL: Your latest single (from the new album Bloom & Breathe)  “Low” will be released very soon! can you tell us what is the meaning behind its lyrics (and its title)?

GATES (www.gatesnj.com): “Low” was premiered on Rock Sound recently and we’re really excited about the response so far.

I wrote the chorus while I was sitting at my old day job, folding clothes and sweating in a laundromat in the middle of summer. I really felt like I was losing everything that defined me as a person at the time. It got so bad that I really thought about quitting Gates just so I could find better work, and because I was just so angry and depressed most days.

I was only keeping the job so I could keep getting time off to tour and write, and it was killing me inside. It got to the point where I could barely even enjoy what little time we were able to get together and play, but I realized that writing was one of the things that was really keeping me going, it was something to look forward to, and I persevered. I think “Low” perfectly sums up where I was, mentally, physically, and spiritually.

This song contains one of a few references to “Fahrenheit 451” on the record.

RYL: The album will be released in few weeks, how are you preparing its launch? Will you do a particular show for your fans?

GATES: We’re going to be heading out on a five-show run with Pianos Become The Teeth and Frameworks the last week of October, as well as doing two shows with Boysetsfire the days immediately following the release of Bloom & Breathe.

These will be considered our album release shows and we’re excited to play new songs, and to share these nights with our friends. I’m particularly looking forward to showcasing some new material for the people who have been with us from the very start, and who have been listening to us play the same songs for years.

We’ll be touring through November and December as well supporting the record, so keep an eye out for those dates very soon!

RYL:  Tell us everything about the song “Not My Blood”….what it does mean for you?

GATES: “Not My Blood” was the first song we started working on for the album and the last one we finished, with the ending being the final part written for the record. Lyrically, it’s addressing how different art and business truly are.

I’ve seen a lot of music fans in the comments sections giving their insight to musicians, such as “if you’re not making any money, your business model clearly isn’t working.”

I’m not sure any of us want to listen to a world full of musicians working on their business model and not their art.

Fun fact, the song title was taken from the movie “War of the Worlds.”

GATES: Recently it’s been “Not My Blood” as it’s the newest song we’ve been playing, and it feels good to get some new material into the setlist.  I’m also really looking forward to playing “The Thing That Would Save You,” and really all of the new songs and we’ve been playing some of the Sun Will Rise material for four years now.

We’ve also been playing “Skyline” which we previously thought we’d never play, and it’s been really fun to perform as well.

GATES: I usually first write tidbits, lines, ideas, words and anything else into my small Moleskin notebook.  I also try to take about four pages of my spiral notebook and free write about the topic I’m hoping to address.

Then I sit in front of a computer for hours and hours fine tuning the lyrics and making sure the song (or album) has a cohesive message and that the tense and imagery is as consistent as I can make it.

For Bloom & Breathe, the topics are a little more personal than I’m used to, and because of this I tried to edit less and keep the original content of the lyrics more, similar to the song “To Those Who Fell and To Those Who Carry On” which was written stream of conscious (and is still my favorite song lyrically).

That being said, there are still songs like “Bloom,” “Light The First Page,” and “Again at the Beginning” which took months and months to finish.

I started lyrics for “Again at the Beginning” before You Are All You Have Left To Fear was even recorded.

GATES: Really tough question, because I have no idea how to judge what’s “best.”

I’m very proud of the song “Skyline,” which only contains four lines of lyrics, but I think it sums up the entire message of both The Sun Will Rise and Lead Me Home and You Are All You Have Left To Fear quite efficiently, that message being that no matter how bad things get, I still believe that they can be good again.

I also wrote a pretty dope verse in a rap song my brother and I created called “Diet Pop.” So probably one of those two options.

RYL: Do you remember the day you wrote “Walls” from your EP “The Sun will rise and lead me home”?

GATES: I remember the day I came up with the chorus. Walls was written instrumentally, for the most part, before I even joined the band, so I would drive around with the basement demo on a burned CD-R and just try to sing melodies over it.

The chorus came to me when I was driving under the BQE getting ready to turn onto the freeway, and it was raining as well. I’m not sure why, but the demo was always called “Walls,” which inspired the central theme of the song. I took to a piano for the first verse to nail down a melody there, though, and it eventually shifted again when I started finalizing the lyrics.

A lot of people have lifted their own meaning out of this song, and because of this I consider it a great success lyrically.

RYL: Is there a rock song that you really hate?

GATES: I know it’s not rock, but I think the song I hate the most is “Tonight’s Gonna Be a Good Night” by Black Eyed Peas. It represents everything I dislike in a song; meaningless lyrics, basic chord progression and melody, sounds like they wrote it in ten minutes, aimed entirely at the club crowd, terrible lyrics, awful lyrics, and did I mention the lyrics are hot garbage?

It just doesn’t cover any facet of why I like music, in fact it does the exact opposite and successfully showcases everything I hate about modern pop.

RYL: What is more difficult…..write lyrics or melody?

GATES: Lyrics a thousand times over. The melody nine times out of ten comes mostly from the gut, or comes first, and I like to stick with what keeps coming back to me or what’s stuck in my head the next day. Melody writing is also a very natural process, much like writing on an instrument.

Lyrics are an analytical process.  It’s not fun at all, and it requires hours of editing and staring at a page or a Word document until I’m satisfied.  The end result is much more rewarding, however.