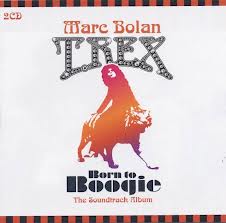 Born to Boogie – The motion picture

Have you ever dreamt to have in the same room jamming Marc Bolan, Ringo Starr and Elton John? In “Born to Boogie” your wild desire will be satisfied.

Produced and directed by Ringo Starr in 1972 the movie/concert can be considered one of the must have for any lover of T-Rex music.

These were the years where Ringo was really in to movies and he created and developed his own label: Apple Corps.

DId you know that John Lennon said that T-Rex were going to be bigger than the Beatles? In fact the band,with Marc Bolan as a front man, was driving full crowds of people crazy.

Unfortunately Marc left us too early, he was only 30 years old when he died in a car accident.

If you will buy the dvd edition of the movie, you will be able to enjoy a special documentary made by his son Rolan, where he interviews all the people that contributed to the movie or to the career of the band.

It is indeed an occasion of discovery another hidden chapter of the history of Rock n Roll!