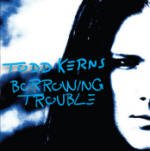 RYL: “Borrowing Trouble” is the name of your last album released in June, are you happy of the success obtained so far?

Todd Kerns: It’s all been a bit of a dream, really. The response has been so overwhelmingly positive. We did 250% or our original goal on our pledge for it in the first place. Very exciting. It’s an emotional and personal album and I’m happy that people have had their own personal connection to it.

RYL: From a songwriting point of view, which are the main changes compared to your previous songs?

Todd Kerns: Well, the obvious change is that I chose to present everything in their most naked form. In reality many of them were originally formulated to be full band rock songs as well but I’d always wanted to challenge myself to make a more intimate recording and this seemed like the perfect time for it.

RYL: “The Devil in Me” is one of our favorite, can you tell us what is behind its lyrics?

Todd Kerns: I’m always fascinated by human nature and ‘bad’ or ‘wrong’ behavior is as natural, and perhaps more natural, than ‘good’ or ‘right’ behavior. It is something that I am constantly searching for within myself. We like to pawn off responsibility to cliches like ‘the devil made me do it’ when in reality we are all accountable for our own actions. Once we all come to grips with that the better we are for it. I think everyone wants to be bad naturally but we have to make choices within ourselves to ‘do the right thing’. The Devil In Me is about trying to contain those natural things within ourselves. Not always easy.

RYL: You utilized Pledge Music to fund the album and you obtained an amazing response from your fans, you ended up collecting more than what you were planning…how was this experience?

Todd Kerns: I wouldn’t have wanted to do this any other way. The response was staggering and really drove everything forward. I don’t share the pessimistic attitude that music is dead and no one buys music anymore. I have seen this proof first hand. It is alive and well. On top of that we have raised some money for a good cause. I put my money towards Muscular Dystrophy research.

RYL: While you were on tour with Slash did you have the time to write new songs?

Todd Kerns: Absolutely. I am always trying to push myself creatively. Once I had made the decision myself to make this an acoustic based album it opened up a whole other world of possibilities. I am as easily distracted as the next person by all the things that distract us but I try to be creative in one medium or another every day.

RYL: Now you will start touring promoting your album? What do you plan until the end of the year?

Todd Kerns: It has been very difficult to do too much to tour the album due to my heavy schedule within the world of Slash. We are already in pre production for the next Conspirators album and that won’t slow down anytime soon. I am trying to do an appearance here and there but largely the good ship USS Conspirator is already back at sea.

RYL: Touring is like oxygen for any person that does music, what do you think about the decision of Motley Crue to do a farewell tour due to the health conditions of Mick Mars? They said that they don’t want to be separated, so it is either the four of them or nobody….

Todd Kerns: I can’t imagine a Motley Crue without Mick. I’ve had the distinct pleasure of getting to hang with him a bit and realize that in many ways he is the heart and soul of that band. You have to keep in mind that he’s the only one that chose to not do anything outside of the band. No solo albums or acting or books.

Perhaps this may be due to his health but I think that is how it should be. Mick is and always will be the guitar player for Motley Crue. I will accept no other version.

RYL: Let’s go back to your songwriting, how do you usually write your songs?

Todd Kerns: Songs come from everywhere. I used to write a lot more from the music out. In more recent years I’ve found songs within a phrase or a lyric or a title. I think that’s the beauty of it is that you are taking other roads to the same goal. Songs are sometimes written from a rhythm or groove. Sometimes from a loose jam or sometimes a very focused and rehearsed arrangement. I think you just need to just jump into that pool and swim.

RYL: What brought you to write “So Close So Far”?

I wrote ‘you can die for all I care’ and though I would never honestly wish that upon anyone it was an honest emotion for anyone dealing with heartbreak. It’s an honest emotion but a dishonest sentiment because time has a way of erasing hurt and anger.

I believe music is my therapy and I can write away those demons. I can only hope that other people can relate to what I’ve said.

RYL: in your Opinion , which are the best lyrics you ever wrote

Todd Kerns: I don’t usually sit around patting myself on the back but I’m proud of some of the lyrics from my solo album. There is a forthcoming solo album entitled TKO coming in 2014 which contains some of my favorite. I would have to say the song No Reply from the Static In Stereo is my go to answer. It says so much of what I was going through at that time.

There are times where I am just writing without any conscious idea of what the theme is and it will present itself after the fact. Magdalena was that way. It was simply a musical name that I began singing and when I sat down to scribble down some verses I realized it was about a profoundly doomed relationship I’d been a part of. Lyrics are funny that way.

RYL: Rock Your Lyrics is based in Dubai, we remember we saw you in tour with Slash and that night also Alice Cooper joined you on stage! It was great! What do you remember of that night?

Todd Kerns: That was a very special night. It was our first night back after a break and getting to do it with Alice is beyond an honor. We’ve been on stage with him several times and it is never lost on us ever. The man is a legend and a big part of my musical make up. A big part of all of our musical backgrounds, Slash included.

Really and truly an honor and memories to carry with you for a lifetime.