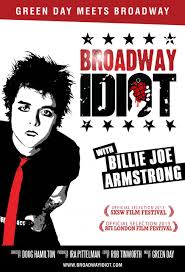 American Idiot is not just a Green Day album, it is also a very successful musical (directed by Michael Mayer) that hit Broadway in 2010 and then USA for the two following years.

You didn’t had the opportunity to see it? Don’t worry, if you live in US you will have the possibility to see it this winter and next spring.

For all of you that live in the other parts of the planet, well… you should start with the (just-released) documentary “Broadway Idiot”.

As Billie said during an interview, he wouldn’t ever expected to have his music played in a Broadway show…..from a punk band to musical……. NEVER!

Well, he did, together with a fantastic director (Michael Mayer), that helped the music to become “musical”.

It was indeed a great challenge, but the success obtained by the show was just incredible! so many positive reviews and, more important, an incredible reaction by the audience in the theatre.

We tried that, believe us…..the SHOW IS JUST AMAZING!

Broadway Idiot is a behind-the-scenes, a huge energy channeled for the preparation of the play that is shared (finally) with the fans…..as it is said….this documentary is a gift to the fans, to the production, to the actors and to the big family of Green Day.

You will have fun, you will get to know the main actors and you will see that happy look on the face of Billie, while he is discovering that his songs can , as he said, even improve.

He loved it so much that occasionally he joined the cast of actors and played live the part of St Jimmy.

It is the case of 21 Guns that was presented as a absolute preview during the ceremony of Grammy Awards where the all cast of the musical went on stage.

Nothing to add more than this, the rest you will have to discover watching the documentary….

One last thing…….can somebody explain us as well what the f@#K Donald Trump was doing at the premiere of the show?