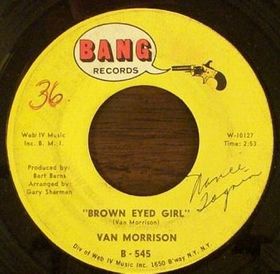 Van Morrison, a reference in the rock n roll history of the sixties.

Today we speak about 1967, the year of Grateful Dad  and Sinatra with Strangers in the Night.

Van Morrison wrote this song remembering a old love story with a “brown skin” girl and gives to the song the same title.

But Van Morrison feared the censorship of one America very politicised and racist, so he decided to change the title in “brown eyed girl”