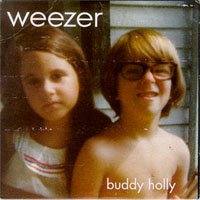 Weezer is the band of Rivers Cuomo, it was formed in 1992 and band members were also: Patrick Wilson, Matt Sharp, and Jason Cropper (quickly replaced by Brian Bell).

It is an alternative band that did Indie Rock mixed with Pop; Rivers Cuomo is the anti –rockstar (at least in his appearance) , he studied at Harward and will leave later the Weezer to continue his studies.

Their producer, Mr Ric Ocasek (already known for his collaboration with bands like No Doubts, Suicide, Bad Religion and Hole among others), played an important role in the success of the band with their first album “Weezer” 1994.

The last album made by the Weezer was released in 2010 and is called “Death to the false metal” but , we can say, weezer disappeared from the scene since 2005.

Buddy Holly has been written by Cuomo in 1994 and he is a direct reference to the American guitarist and singer Buddy Holly that died young at the age of 23 years in a car accident.

The video had a great success with the public due to the fact that the band played, with the help of the digital technology,  in the “Happy Days” tv series.

At the beginning Cuomo didn’t want to include it in the album, while later he agreed after strong push from Ocasek.

Buddy Holly had the classic look of the good guy at the beginning of the fifties………..then later defined as geek……….big optical frames, weird shirts and  always the hair combed as mama will do…..