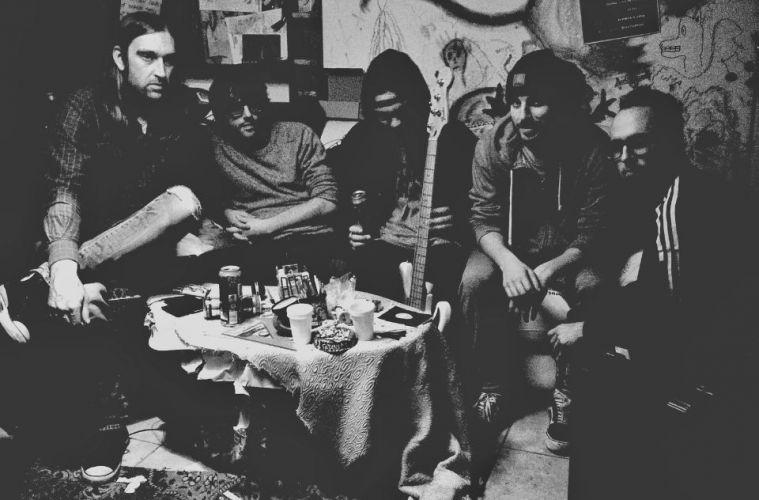 It really depends on the song, sometimes I write the lyrics while we are at rehearsal, maybe because we have a new riff and, while the others are playing it and trying to make it work, I try to find something to say, based on the groove of the music, other times all the lyrics just come out, just like that, out of nowhere.

Sometimes I also use notes that I have previously written without any music in mind.

Not really, if there’s something I don’t want to share I simply don’t, but most of the time, I don’t talk about certain aspects of my personal life just because I think that would not be interesting to anyone.

That’s a tough question, the answer can really change based on the moment you ask me. Right now I think “All My Friends” is the most meaningful to me, it talks about a lot of things that happens when you live a rock n roll lifestyle, things that are fun but can really get you into serious trouble if you can’t control yourself. But this is also something that could happen to anyone, not just rock n rollers, even a banker or a teacher has vices, probably different ones but not necessarily healthier or safer. Often those people are treated and tend to be considered differently from, saying the usual junkie. They tend to see the person as a victim and not as somebody who has an actual fault. There would be somuch more to say, so it’s better to stop here or I’ll never do, anyway, you can see I really care for that song.

‘Peep Show’ talks about people that are used as money machines by talent shows or pop singers that get famous just because of how they look and not because of their music. They don’t even play for real, they just dance and play in playback and we don’t really like that. We would really appreciate if the sexualised aspect could be eliminated from mainstream music.

‘Overthinking‘ is self-explanatory, the title says it all. It’s a song where I try to say that sometimes you have to just do things and not think too much about it, because you know, sometimes you are your worst enemy and you’re afraid of doing something just because You think too much about what could happen, if you can do that thing the right way, if it’s good for you or not, what the others would think if you do that and that’s just bullshit. I think that I was thinking too much too while I was writing those lyrics so I figured out that I should just talk about that.

Do you remember the day you wrote “Watch Me Go”?

I don’t remember what the exact day was, but I remember that we were rehearsing and that was a song where the lyrics just came out, I think I just added a sentence later. That’s a pretty personal song, Tell people to be themselves, live their lives as they desire and if somebody tries to tell you what to do or tries to make you do things you don’t want to, just go away. Basic stuff but still an important message.

Yes, I think there is. All the songs talk about situations that make you feel uneasy or annoy you somehow, in some ways and I think that It’s important and could really help to realize that, if you feel like that, you are not the only one and that doesn’t have to stop you from doing what you like or being what you wanna be in your life. I think that punk music and rock n roll in general can help you face a lot of situations in a more positive way and overcome difficulties in life. It’s not that I planned it to be that way, but I’m really happy it came out like that.

Best suggestion our producer gave me was to eat honey and drink alcohol while we were recording vocals. And I’m not joking!

Our plans are mostly to play live shows and write new material. In June we will play at Retrovox Fest, where we’ll also record a song in their studios that will be part of their new compilation and, you know, we would really like to do a new song for that occasion.