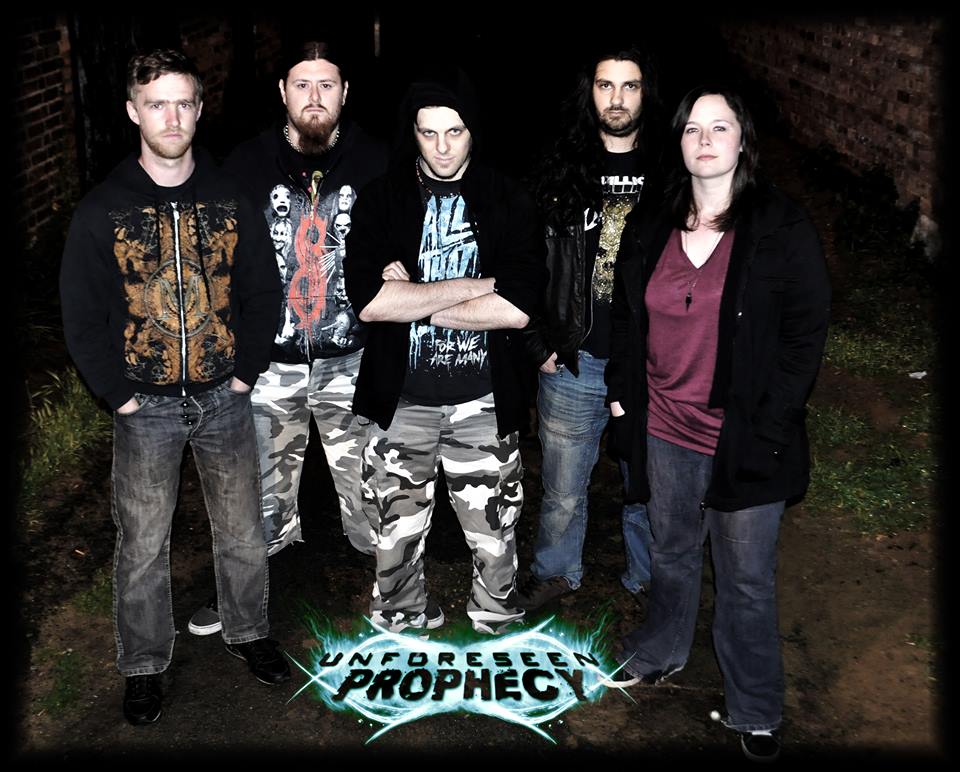 RYL: Tell us more about your album “Burn The Skies” that will be released the 5th of January, what does it mean for you?

Unforeseen Prophecy: Well Burn the Skies is actually our second release to date and is a 3 song EP. We’re working on the full length album, hopefully to be released late next year.

It’s a fitting set of tracks which identifies our development as a band since our first release and really helps solidify our style into three songs which all take various turns to help differentiate one from another.

This has shown our diverse style, where we can become a heavy machine in one song and mellow giant in another. These songs build upon our initial release “Without Consequence” delivering intense tracks but incorporating our female/male vocal mix.

RYL: We love “Oblivion “,what inspired its lyrics?

Unforeseen Prophecy: Oblivion was written at a period of thought and wonder. It’s generally written about the end of the world and one persons journey through it. It depicts the choices we all have to face and the dwelling thoughts that linger when it all ends and we’re left alone.

Could I have done things better? Could I have been a better person? What more could I have done? I’d imagine if one person was left on earth, they would be having these kind of thoughts, alone and scared.

Like most of our songs, there is a message of hope in there and the final words of this song bring a dark and depressing mood to a hopeful climax as the message displays our strength and will to fight on regardless of the devastation before us.

Unforeseen Prophecy: Writing and playing something that means something to you. If there is passion in the music, whether it be from the lyrics or a particular riff within the song, those that are played with feeling often turn out to be the best.

RYL: Do you remember how you wrote “The Placebo effect” ?

Unforeseen Prophecy: The placebo effect, song and lyrics, were written by me (Paul wells – vocals). I wanted to write something suitably heavy and fitting to our more aggressive side. It incorporates an experimental faze in our writing, where we branched away from the usual 4/4 time signature and gave 12/8 a go.

The results speak for themselves and the song is exciting and exhausting to play! The lyrics were written around a subject which caught my attention after watching a review of a video game on youtube.

The person used the phrase the “Placebo Effect” to describe something within the game and this got me into researching about it. Upon discovering some of the things involved with a placebo effect, I decided to write a song which kind of asked a question. Its a moral dilemma to give someone a drug which doesn’t actually do anything but they think they are getting better because of it.

The lyrics take both points of view into account and leave the listener to make up their minds.

Unforeseen Prophecy: I’ll usually have the music written first and then think of or read about a topic which has made me feel something, whether it be hate/love/shame/anger/doubt/despair etc… The lyrics normally come flowing once the topic is alive in my head and then its just a case of fitting it with the music.

Unforeseen Prophecy: Difficult to answer really. I’m quite fond of a verse in ‘The Placebo Effect’ which goes:

“I see the reason, but I question why. What good is solace, if its a lie?”

This kind of shows a understanding of the event but posing that question, is anyone really going to benefit from a lie?

RYL: You will be touring very soon? tell us more about it…

Unforeseen Prophecy: Well we hope to head into the studio sort of mid way through next year, for our debut full length album and then I’m sure after that we will be booking up as many tour dates as possible.

Until then, we hope to do the odd show here and there to keep the music fresh and alive for our fans. Keep an eye on our social media sites for updates!

RYL: Last question is about “Burn the skies” what inspired its lyrics?

Unforeseen Prophecy:  “Burn the skies” is based around that feeling of doubt we all have at some point in our life’s.

The lyrics are supposed to personify that feeling into a stalker type character, as if it’s doubt following you around.

“I see you in the shadows, I watch you burn the skies, you’ll never stand beside me, watching me die”

This basically is our way of telling doubt, we know it’s there, we watch it lurk and consume the sky around us but it’ll never consume us. This follows our message of hope within our songs and blends our female/male vocal mix to demonstrate it.