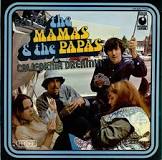 California Dreamin – The Mamas & The Papas

Did you know that The Mamas and The Papas have their origin in NY city?

Listening to their most famous success “California Dreaming” we would have expected them writing this song in front of the ocean with a guitar, a fire, some surfboards and more… (ok, we know,it might be too much, but we are still very close to our holidays 🙂 ).

The song has been written in NY in 1963 by Michelle and John Phillips(the two were member of another group “The New Journeyman”) and released in 1965, the first year of formation of the band (that, unfortunately, lasted until 1968).

We all know that this song is talking about the desire of being in California during a cold winter (like the NY cold winters can be) and we also know that it became a huge success and also hymn of a whole generation in the late sixties, early seventies.

What you might not know is that the song did not had a quick success, in fact , at the really beginning, it was just famous in Los Angeles among the surfers community, then in 1965 reached the top of the charts.

During the last 45 years many covers of it have been done, the most famous one is, for sure the one The Beach Boys did.

We like the version of The Mamas & The Papas, you?