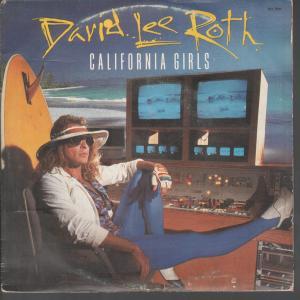 I wish that all could be California Girls……well, if you try, certainly you would agree with David Lee Roth on his cover of Beach Boys.

You remember, we talked about David while we reported about “JUMP” of the Van Halen (DLR was part of them  for thirteen years, from 1972 to 1985).

California Girls cover was done right after he broke up with the famous band….we are going back to 1985 in the period of GLAM METAL.

That year David released an album called “Crazy from the Heath” that features four covers; the one of Beach Boys will see also actual members of the band doing back-vocals to David (Carl Wilson and Christofer Cross).

Let’s go back to Beach Boys and their world made of surf, beautiful woman, cars and California of the sixties…….

During the period of Glam Rock, in Hollywood and Santa Monica Boulevard, everything seemed back on the sixties …….especially for the bands that were playing around the Trombadour or in Sunset Strip (Roxy,Rainbow…..)

The song it is all about them, blonde, tall, sexy woman from California and, especially, from Los Angeles.

The beach Boys toured all the world but they always wanted to go back to their places to the “cutest girls in the world”.

In the video David is a tourist guide that show to a weird variety of tourists who these girls are real are….. it is so crazy!!